I picked up this real nugget of a gem this evening on South Auckland from the NZ Herald. Yes it did make me smile too.

From the Herald on Sunday

Long seen as poor and crime-ridden, South Auckland is reinventing itself as a vibrant business centre. To the alarm of some in Central Auckland, Manukau is even being spoken of as a second CBD. Joanna Mathers takes a look around

At 9.40am on Thursday, a masked man holding a sawn-off shotgun walked into the Manurewa branch of pawn broker and second-hand trader Dollar Dealers. He fired at a display cabinet, shattering the glass, then removed a few items before running outside where an accomplice was waiting at the wheel of a stolen silver Nissan.

The car sped from the scene and was dumped a few streets away. The pair fled on foot. [Note from Admin; err didn’t hear a story of this recently crop up so not quite sure there]

It sounds a familiar story of South Auckland, which is often seen as the city’s badlands. Frequent reports of baby-bashing, drug busts and violent crime have given parts of the former Manukau City an unenviable reputation for poverty and deprivation.

But there are cheering signs that times are changing. Soaring Auckland property prices have made the area popular with first-home buyers and people keen to escape the isthmus; office space is keenly sought after; chic cafes are sprouting among the sandwich bars and Asian restaurants; the arts scene is booming.

One contestant for the mayoralty in next month’s local body election is touting Manukau as Auckland’s second CBD. And, without wishing to put the mockers on next weekend’s defence, the local rugby team has successfully defended the Ranfurly Shield, which has proved rather difficult this season.

The old South Auckland stereotypes are looking more threadbare with every passing week.

You can read the rest over at the Herald site which goes into the points above in more detail.

The article though coupled with the one I commented on earlier this weekend (“Papakura – The Place to Be – For First Home Buyers“) shows that South Auckland IS reinventing itself and is fast becoming the jewel in Auckland’s Crown.

Come 2015 and South Auckland is still that rising jewel in that Auckland Crown as the region continues to attract growth and investment. 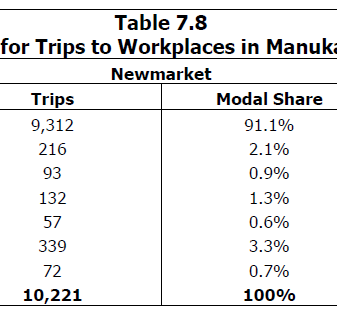 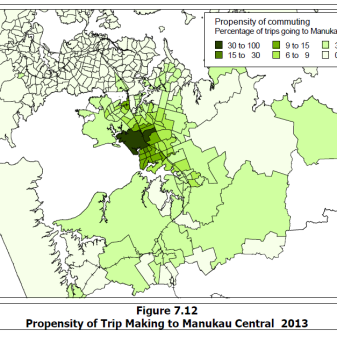 A lot of South Auckland commutes within itself to large industrial or commercial complexes like Wiri and Manukau City Centre Source: http://www.scribd.com/doc/236566739/Richard-Paling-Report-Transport-Patterns-in-the-Auckland-Region#page=88

This piece from the Herald yesterday illustrates how the education sector continues to do its work in South Auckland boosting the people and mana of the South.

From the NZ Herald:

South Auckland gets a boost of academic mana

The first task when AUT moved into its new premises in Manukau, South Auckland, was to pull down a wire barrier surrounding the site.

High and foreboding, the fence was used by former owners Carter Holt Harvey to keep the public out. Five years on, its removal has become something of a metaphor for those who work in the grassy, tree-lined campus and who are charged with bringing tertiary education to a community still largely unsure about the university world.

“For me and everyone who works here, it’s quite fascinating,” says Professor Geoff Perry, the Pro Vice-Chancellor of the campus.

“Evangelism isn’t quite the right word, but there’s definitely a sense that we are doing something valuable. We are here to work with the community and to make a tangible difference.”

The campus was opened in 2010 after the Government tasked AUT with helping South Auckland into high-level tertiary study, over and above those who already studied at the two local polytechs.

The Government was concerned that while the region has one of the country’s highest rates of young people, its rates of university uptake are extremely low.

So far, the project has been successful, with a building expansion about to take place to absorb the 4100 equivalent full-time students the university is funded to teach until 2020.

While its goals may sound lofty, in practice the university’s structure is extremely practical.

Its programmes are deliberately wound together with the region’s economic needs, and the needs of those who live nearby, a format that fits both what the community and the Government wanted.

“In the early stages we thought we would move a whole school or faculty, but in the end that became too narrow,” says Professor Perry.

Instead it’s moved to concentrate on four areas – Health and Science, Food and Nutrition, Technology and Enterprise, and Human and Social Development.

Some of the courses are what Professor Perry calls “destination programmes”, big-ticket items that attract learners from within and outside the area and give it “academic mana”.

Others are duplicate programmes also offered elsewhere – first-year business courses, for example – some which provide a pathway to degrees at the university’s other campuses in the CBD and Akoranga. There are also a few bridging courses, but they take no more than 10 per cent of all students a year.

Central to the framework is industry connection to ensure students can get jobs in the real world, to meet new people and where they are exposed to opportunities.

Tertiary education minister Steven Joyce was pleased with overall plans, but would like to see more industry relationships.

“They’re making good progress there but there is more to do in that space,” Mr Joyce said. He noted AUT was a young university, meaning all of its relationships were fairly new.

Professor Perry said while there was work to be done, belief in creating change was a strong driver. Many students would be the first in their family going to university, he said.

Construction on the new building – which will host lectures and workshops and also has conference facilities – starts next month.

• Government’s goal is 55 per cent of all 25-34-year-olds having a tertiary education qualification.

• Another of its tertiary education priorities is lifting the achievement of Maori and Pasifika students.

• South Auckland has the fastest growing youth population but the lowest population in tertiary study.

• 60 per cent of students at the AUT South Campus come from the wider South Auckland area.

• The university campus has feeder schools from across the region, including Papatoetoe High, Aorere College and Otahuhu College.

Right now that makes about 1800 FTE students (full time equivalent) (if you include MIT over at the other end) studying in Manukau City Centre. That is forecast to rise to 5,000 (if not more again depending on MIT) by 2020 (University of Auckland has 38,000 FTE’s as a comparison). But most of all a door way has been opened and a path for a better future has been created for the South in the heart of the South, Manukau City Centre.

Now if we can get the graduates lined up with employment in the South then we are onto a real winner in further boosting the area and shaking off that social deprivation that still haunts us. The good news is that employment growth continues right across the South in both her Heavy Industrial Complexes and Manukau City Centre itself.

With all that, Pasifika, Armageddon, The Home Show, and no doubt more events to come plus things like new apartment towers and more shops in the mall I say we are doing quite well in beginning to stand up on our two feet and pull in even more events, institutions, and other investments on top of what we already have.

Now if only Auckland Council and its Council Control Organisations could get with the program….

Hmm might be something else that needs a tad more work on at the moment.

I start giving my evidence for Manukau to be elevated in the Unitary Plan Centres Hierarchies in September.