Where are the people?

On Friday the Council released a report in the supply of Business Zones land and their likely capacity through the life of the Unitary Plan ( -2026) and the Auckland Plan (2012-2041).

You can read the summary and main reports below:

The reports are very particular and make their case on the supply, demand and capacity of the Business Zones in Auckland and whether we face a shortage of business (including industrial) land or not.

In short with industry we are not facing a shortage yet for industrial land with the South able to take the brunt up of new industrial development. That said if heavy industry decamps from the Onehunga-Southdown complex (and it will) then we do face shortages for industry.

With commercial the results get a bit more mixed. According to the report we have enough theoretical capacity in the Metropolitan Centres (they also had the most vacant or potentially vacant land available) while the Town, Local and Neighbourhood Centres face shortages of land capacity.

Also and again the report suggests the South while having most capacity is also to take up the brunt of new commercial and industrial development as well (even more than the City Centre itself). Given there is around half a million in the South now and that is forecast to hit around a million by the end of the Auckland Plan we have to be smart in how our commercial and industrial land is used if we want to mitigate against excessive long distance commuting into the Isthmus.

Looking at some key extracts from the reports I am going to apply a Human Geography lens (rather than an Economist lens as the report did) to flesh out key points governing demand and supply of the Business Zones land through until 2041.

The report suggests that the North, Isthmus (would be the City Centre) and the South could take most of the commercial growth while the West experiences little appetite (a problem within itself due to high residential growth). The report suggests that commercial land demand in the South through to 2026 is around 15 hectares per annum. For a comparison Manukau City Centre (Metropolitan Centre zoned) is around 55 hectares while the wider surrounds if included was some 245 hectares. Given Manukau has a poor land utilisation rate (and most is owned by Council) Council can argue (and did) that the Super Metropolitan Centre is not necessary at this stage in Auckland’s development (see my Centres Evidence at the bottom – page 42, paragraph 46). But as I argue back the Super Metropolitan Centre looks at the linear Geography of Auckland (that extends into the Waikato) as well as the goals from Auckland Transport not wanting 80% of southern commuters going further north than Manukau.

This is a tad annoying as the new figures on maximum floor space capacity would have been beneficial at the Centres hearing last year.

While the demand is concentrated to the South for business land that demand would be around the industrial complexes (the South has four of the five) the demand in Metropolitan Centres at moderate levels but in need of reconciliation. Reconciliation on why is the demand in the Metropolitan Centres low (nine of the ten Metros according to the ACDC15 modelling were deemed non-viable with feasible development) given the Metro’s are meant to be the second highest in concentrated density and development behind the City Centre itself.

This answer needs to be answered on a Geography angle rather than Economic angle before the Hearings Panel if we are to achieve both successful integrated developments and mitigate against further congesting the already congested Southern Motorway and parts of the Southern rail Line (the Otahuhu-Mt Wellington bottleneck). To further amplify the geography issues of the South here are some extracts from the Ministry of Business Innovation and Employment and Housing New Zealand: 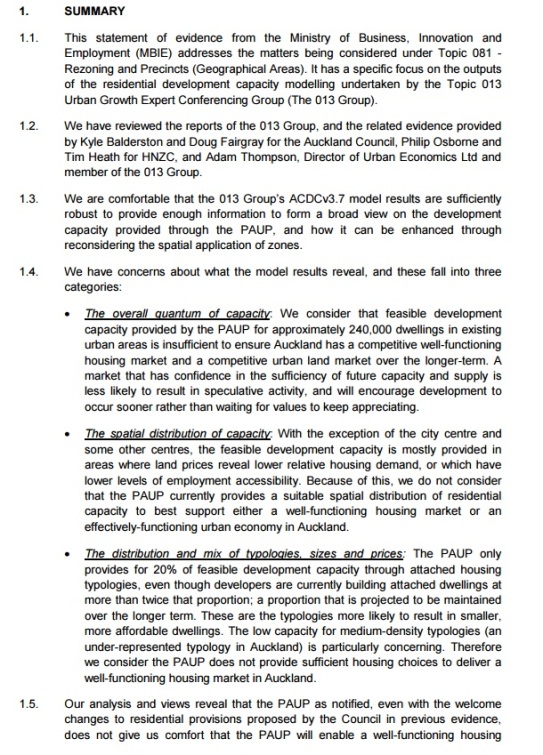 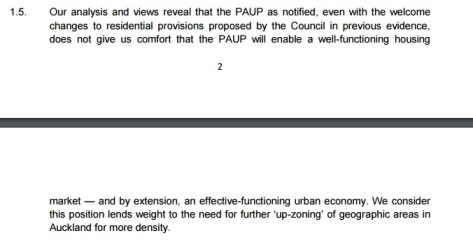 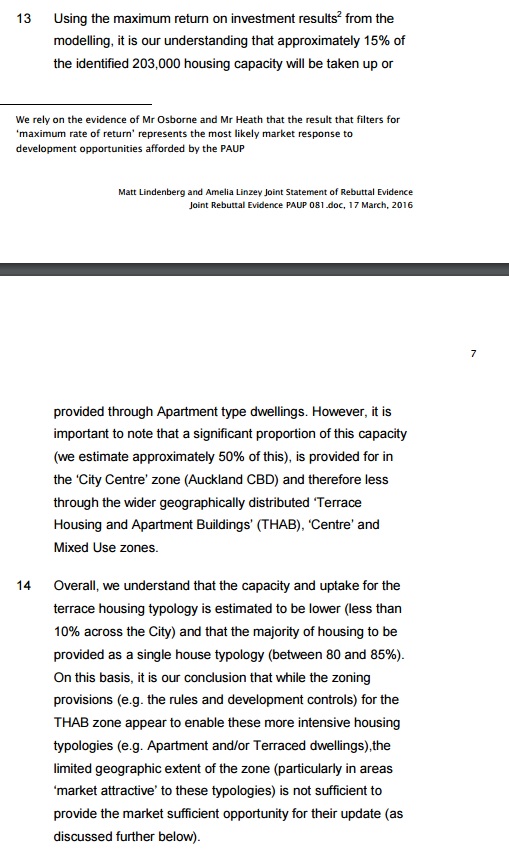 Effectively the South is moving in such a way that it will become a de-facto City within the City of Auckland itself. This is not a bad thing and should not be discouraged by authorities in any way. Geographically (both environmental and human/urban) this would be of benefit to Auckland and help with the Auckland Plan goal of World’s Most Liveable City. If we take a look at this extract from the report this is where demand (type) will likely to be:

Most growth in employment is expected in economic sectors that generally prefer to locate in commercial zones (or in non-business zones). The forecasts indicate that almost half of the growth in employment is expected in four industries; health, professional services, retail and education. It therefore follows that there will be a significant demand for business floorspace focussed on commercial zones.

If I take a look at what the South has going for it, it is the following:

Remembering this from then Auckland Council Property Limited now Panuku Development Auckland (which is setting about a Transform program for Manukau):

Manukau City Centre is the largest Metropolitan Centre in the South and contains the southern most mall servicing around 393,000 people (Manukau, Manurewa-Papakura and Franklin Wards) as of 2016. As mentioned earlier the population and demand in the South is increasing and while there is large amounts of theoretical floor space available, as I asked the Hearings Panel: “Are we planning for now, 10 years or 50 years down the track?”

Essentially the South will start seeing agglomeration  affects  similar (although lesser) to what the Isthmus and City Centre do now. The Geography of the South I predict will evolve in such a way that it (the South) it becomes a de-facto City in all but name (without administrative powers though). As I said earlier this is not a bad thing and could benefit Auckland greatly in ways such as:

The report for the Hearings Panel looks at the quantitative analysis of business zoned land in Auckland but in my opinion does not look at the qualitative side that will ultimately influence the demand and supply of that business land. 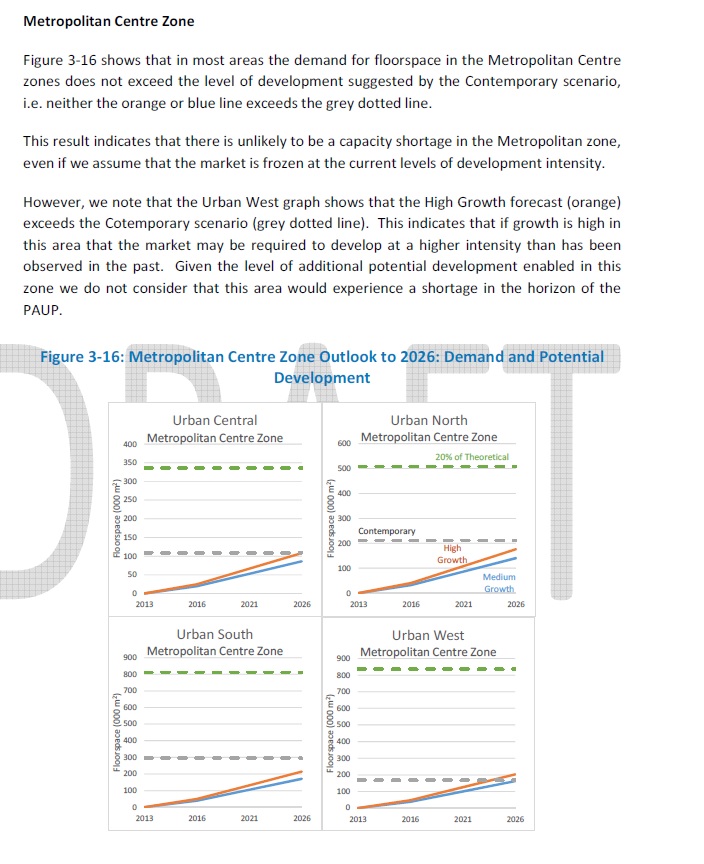 The charts say the Metropolitan Centres in the south (Manukau, Papakura and Botany) do not hit initial capacity issues for another 20 years (2036) thus arguably no need for the Manukau Super Metropolitan Centre zone (or expansion of Papakura and Botany). I would challenge that straight away if the South (including Howick and Botany) is to take 45% of the population by 2041 (2.2m people in Auckland), Auckland Transport’s 80% commute goal is to be achieved, and if Housing New Zealand get their own way in getting more intensification in Otara, Mangere, Manukau, Clendon and Papakura. One other factor I would like to know is whether Council is basing their assumptions with the Metropolitan Centres after the Global Financial Crisis. Because Westfield expanded the Manukau Mall just before the GFC really hit home (but subsequently delayed expanding the other malls due to the GFC). With Westfield is expanding again, Auckland’s continued population boom and most of that boom heading southwards and Panuku is beginning its work in Manukau I wonder if the supply chart above is entirely accurate given? I would say No those charts are not accurate.

So what are your thoughts on the matter?