I don’t usually foray into City Centre active mode transport options but what Auckland Transport have proposed that could have implications on Skypath will catch my attention.

This is what Auckland Transport have proposed in connecting Wynyard Quarter to the City Centre:

The Westhaven to City cycle route is an important connection in Auckland’s cycle network, running between the Westhaven Promenade and Quay Street.

Feedback status: open until Sunday 18 December 2016. Find out about having your say.

The Westhaven to City cycle route is an important connection in Auckland’s cycle network. Running between the Westhaven Promenade and Quay Street, it links to existing or proposed cycleways across Victoria Park to Victoria Street and Franklin Road, Nelson St, and Quay Street. It also connects into the popular Wynyard Quarter area providing safe access for people on bikes to playgrounds, restaurants, cafés, markets and events around North Wharf and the Viaduct Basin.

This work supports our vision to a deliver well-connected and integrated cycle path network across Auckland and forms part of the road and public space improvements we are carrying out within Wynyard Quarter.

Find out more about AT’s cycling and walking programme.

The route selected is a safe and direct route in to the city and is currently used by existing commuter and recreational cyclists, comfortable with riding on the road. Fanshawe Street was also considered as a direct route, however, it was discounted due to the significant bus and traffic volumes.

The proposed route supplements the existing and proposed shared paths through Wynyard Quarter which provide safe access for people on bikes to playgrounds, restaurants, cafés, markets and events around North Wharf and the Viaduct Basin.

The purpose of the design we have prepared is to:

The design incorporates a mix of coloured markings and surfacing, raised tables and humps, signage and zebra crossings.

On-street parking will be retained where safety of cyclists and pedestrians is not adversely affected and at this stage we do not anticipate the loss of any parking.

We want to hear your views on the design for section one of the Westhaven to city cycle route. Your preferences and experiences will help us deliver the best possible facility for the route.

If you have any difficulty completing the form, you can call us on (09) 355 3553 and our contact centre staff will fill in the feedback form with you over the phone.

A report on the feedback and the selected design will be available here in early 2017. If you provide your contact details when you give us feedback you will be notified when the report is available.

What Auckland Transport has proposed is rather underwhelming for an area that is meant to be pro people not pro cars. I am aware there is push back by senior people in Auckland Transport at more dedicated cycling infrastructure (think separated cycle ways and shared spaces) but we must push back. Panuku Development Auckland has a mandate for Wynyard Quarter to be a people’s space not a giant car park or rat run. AT need to do their part and I wonder if on street parking is really needed with off street parking facilities near by in places like Fanshawe Street.

Also are those Sharrows I see in the maps? Our counterparts in the Northern Hemisphere have released papers saying sharrows are dangerous and more useless than just having a general street.

Sharrows are the dregs of bike infrastructure — the scraps cities hand out when they can’t muster the will to implement exclusive space for bicycling. They may help with wayfinding, but do sharrows improve the safety of cycling at all? New research presented at the Transportation Review Board Annual Meeting suggests they don’t.

A study by University of Colorado Denver researchers Nick Ferenchak and Wesley Marshall examined safety outcomes for areas in Chicago that received bike lanes, sharrows, and no bicycling street treatments at all. (The study was conducted before Chicago had much in the way of protected bike lanes, so it did not distinguish between types of bike lanes.) The results suggest that bike lanes encourage more people to bike and make biking safer, while sharrows don’t do much of either.

Take it from Cities Skylines and build actual cycle boulevards like this: 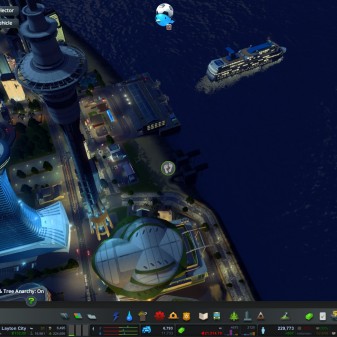 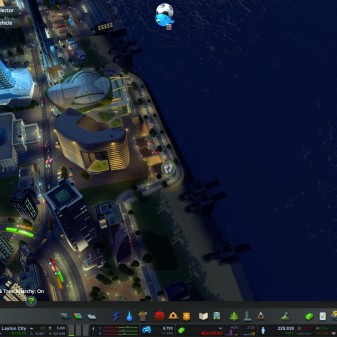 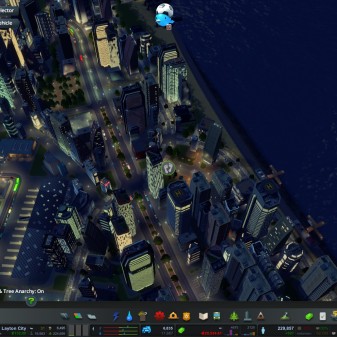 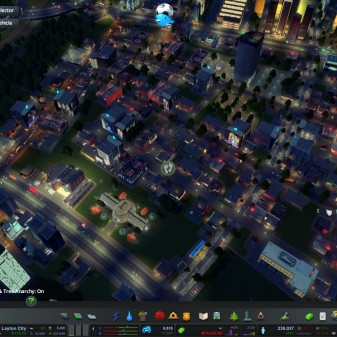 Excuse the flooding in the one of the shots, I need to improve the storm water provisions in that one.

In any case you can see you see how I use the cycle boulevards (accepts only active modes and service traffic like garbage, police, fire and ambulance) connect both within a local area and between two to several districts across the City. The cycle boulevards are used in both commercial and residential areas and are often very heavily used.

Layton City has several cross-city cycle boulevards and many intra-local connections which the Wynyard Quarter proposal by AT would be. If you want an ironic twist the highest land values and amenities are often found along a cycle boulevard or pedestrian road (closest thing to a shared space) NOT a two lane road with on street parking.

It is a case of we need to get behind AT with the Wynyard Quarter proposal and go from sharrows to separated cycle lanes and full cycle boulevards!