After the Auckland Development Committee in June where the Council got itself in a muddle over the Hobsonville Point Marine Precinct (see: A Question About City Building) I asked whether the Council has the nous in assigning land for employment centre development compared to residential land being assigned.

Specifically the question was: Auckland is “great” at “building” residential complexes but is rather “hopeless” at building job and employment complexes (commercial and industrial (not including the main City Centre)). True of false?

After the debate at Thursday’s Auckland Development Committee the Committee resolved to pass a set of resolutions to make business and industrial land a critical priority when new land is released for development.

That the Economic Development Committee:

The Council has agreed to give critical consideration when they do the Spatial Priorities (see below) for business zones to be top priority in any land release by the Council arguably over the life of the Unitary Plan. That being any yellow Future Urban Zone in the Unitary Plan in being flipped to a full urban zone would have that zone flipped into one of the Business Zones under the Unitary Plan (Mixed Use, Town Centre, Light Industry, Heavy Industry, and maybe General Business) rather than a residential zone. Meaning if the Council follows its resolutions properly any new land release would be for business zoning first THEN residential zoning if the land is not suitable nor in demand for the business zones.

Councillor Dick Quax (who was the sole star performer at the September Auckland Development Committee) backed up by Councillor Brewer articulated their points well about the business land situation. Essentially we have three problems in Auckland with our business land supply:

Thus we have a rather interesting problem for Council. Yes the Capacity for Growth Study 2012 says we have all this business land somewhere in the pipeline either under Legacy Rules and the Proposed Unitary Plan but that seems fancy talk for Council not really on the ball with business land supply release (or existing land being more efficiently used).

Put it this way (and Central Government is just as bad) we have had 80 Special Housing Area parcels released allowing for 44,000 houses to be potentially built. How much has been released for commercial or industrial purposes? None unless it was a Private Plan Change.

So yep we have all these places for houses to go (and some areas like the North West are shockers to put these houses with no public transport links or even major employment centres near-by) but no essentially no place for the residents to go and work or establish a business. Something seems a bit wrong here.

Typically in the USA or those familiar with Sim City 4 the order you draw up the new zones especially on a new tile were the following: Industry -> Residential -> Commercial. Here in Auckland we seem to go: Residential -> Residential -> MORE residential -> some commercial -> and then after a while and a ooops some industry is finally zoned in. 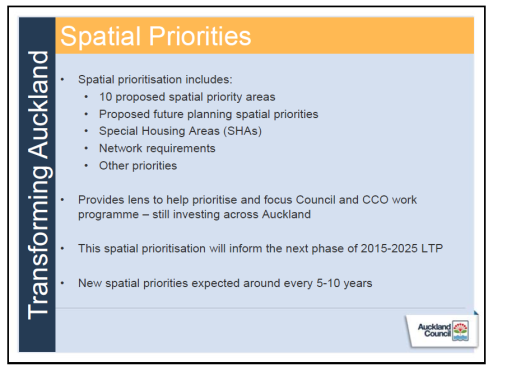 All things considered there seems not to be enough information to allay concerns that we will have the land available for our employment centre complexes. This will require further investigation especially around the Spatial Priorities. I will update as more information comes to hand.