I was wondering when Auckland Transport would catch my attention again over the Summer break. I will give them credit it took about a week to do so but none-the-less this one will leave your head scratching. That is Auckland Transport want Light Rail between Britomart and the Airport via Dominion Road and the South Western Motorway rather than either extending the Onehunga Line to the Airport or building a new line from Otahuhu to the Airport. 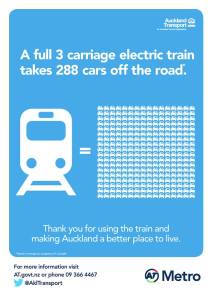 From the NZ Herald:

Auckland Transport is considering running trams to the airport via Dominion Rd, one of the Super City’s busiest commuter routes.

Its consultants have nominated 20 potential tram stops between the airport and Britomart – including eight along Dominion Rd and four on Queen St – but questions are being raised about how the route could serve both long-distance travellers and commuters.

An estimated journey time of 44 minutes for the 21km trip is seen as optimistic by the Campaign for Better Transport and Auckland Council infrastructure chairman Mike Lee, who heads a steering group of parties including KiwiRail considering “rapid transit” options for the airport.

That time assumes trams would travel at up to 80km/h and compares with about 39 minutes for 110km/h electric trains or up to an hour for buses jostling with other traffic.

Transport campaign spokesman Graeme Easte, an Albert-Eden Local Board member, said yesterday that he feared commuters on what was now a very convenient and frequent-service bus route would lose out.

“People wanting to get home at rush hour will be tripping over people with luggage, large packs and the odd surfboard,” he said.

Mr Lee said he had reservations about the effectiveness of a longer-distance rapid transit airport service using Dominion Rd and was sceptical about some of the numbers and assumptions in a report by the consultants.

He believed there was “a major flaw” in business case comparisons estimating the cost of extending trains to the airport at $2.3 billion compared with $1.1 billion for trams.

That was because electric rail already ran to Onehunga – just 10km from the airport – yet a tram line via Dominion Rd “exists only in the imagination at this stage”.

Although funds have yet to be allocated, Auckland Transport chairman Lester Levy said then he did not expect a first stage from Britomart to the southern end of Dominion Rd to exceed $1 billion.

An Auckland Transport spokeswoman said yesterday a decision was likely by the middle of next year on whether the airport should be served by trains or trams.

The transport body is under pressure from the airport company to choose between heavy and light rail by then, to fit in with the company’s plans to build a new domestic passenger terminal by 2021 and a second runway a few years later.

Airport development chief Graham Matthews says the company is “mode agnostic” between heavy or light rail, but trains will need a wider turning circle to reach its terminals.

“Both would provide significant added capacity for public transport to the airport, which is what we want to achieve,” he told the Herald.

But he said whichever mode was chosen, its tracks would have to run under the proposed second runway to an underground train station or surface tram stop.

There are so many things wrong with what Auckland Transport is proposing here I am wondering what their brains trust is seriously thinking here.

Problems include using Light Rail via Dominion Road and the South Western Motorway:

I wonder what Auckland Transport is trying to solve here. Yes we need a Rapid Transit Network connection between the Airport and the City (and for that matter Manukau and the Airport as well) but Light Rail instead of Heavy Rail? It seems Auckland Transport have developed a Light Rail fetish in detriment to heavy rail which is not only already there ready to be extended on but is again the most efficient form of moving a mass amount of people between two points over a medium-long distance quickly. That is 750 people along a route of 11 stops grade separated from road traffic from the Airport to the City in 39 minutes (or 25 minutes to Manukau).

But does Light Rail have a place to the Airport? Yes it does: The Botany Line Sky Train: Time to Link the Eastern Suburbs, Airport and South Auckland up with a quality Light Rail Transit System