It’s a Kombi van, but not like you’ve ever seen before – and it’s coming to a local community near you.

The classic Kiwi camper has had a spectacular makeover, and it’s heading out on the road from today (Saturday 23 July) to support awareness and engage Aucklanders on how, when and why to vote in Auckland’s upcoming local elections (16 September – 8 October).

The van – affectionately known as the ‘Love Bus’ – is part of Auckland Council’s new ‘Show your love for Auckland’ voter campaign, which will run in the build-up and during elections.

“The Kombi van is a classic symbol of adventure, discovery and fun, and embodies the new campaign, which is intended to get people thinking about and voting in the elections,” says Auckland Council’s Elections Planning Manager Glyn Walters.

“Voting is an important part of belonging to this city. It is one of the ways people can be involved in decisions that make and shape Auckland as a great place to live. We want to ensure eligible voters and future voters wherever they are have easy access to the information they need to participate.”

The van is wrapped in illustrated images that Aucklanders will recognise as unique to our region – city scenes, our natural heritage, our many cultures and our amazing recreation spots.

Eye-catching love hearts feature the word ‘Vote’, reminding people that voting is an important part of loving where we live.

“Aucklanders can keep an eye out over coming months for sightings of the van in their communities, or even get in touch to arrange for it to visit you at your local events and sports grounds.”

Auckland Council is starting a conversation with voters to help foster a new sense of excitement about voting and local democracy.

It’s called ‘Show Your Love for Auckland’ and reminds people that voting is an important part of loving, caring for and valuing where we live.

There are important reasons why a fresh, new campaign approach was needed.

Declining voter turnout is a challenging global issue. Almost all mature democracies are trying to reverse a long-term trend of voter decline in elections, and engaging with younger adults is a key part of turning this around. In Auckland, there are more than 450,000 eligible voters aged 18-39.

“We wanted to address this worrying voter turnout trend. We’ve worked with creative agency DDB to come up with a campaign that might help break the cycle of voter decline,” says Glyn Walters, Auckland Council’s Elections Planning Manager.

“We looked at a number of different concepts to see which has the most resonance with Aucklanders and might create behavioural change. One of these was about loving where you live and celebrating that love through voting or standing for office.

“To the surprise of some of us working on the campaign, the ‘love’ concept turned out to be the winner,” says Glyn, who leads the council’s elections planning work, including choosing a communications concept for the 2016 elections.

“When we started working through ideas, some of us thought a ‘Love’ concept seemed a bit remote from elections. However, when we tested it out with a range of Aucklanders, it struck a powerful chord. It captures the optimism and positivity of the city.

“We spent time in this process testing ideas and really addressing the issue of changing voter behaviour. It’s hard to do, especially when you need to do it across a range of age groups. We won’t know until 8 October what the true impact of the campaign has been.”

“We know people under the age of 39 are less likely to enrol and vote than the rest of the population, and that those under 29 are significantly less likely to. It’s important our message gets through in the right way to all age groups and ethnicities, using their preferred communication channels,” says Glyn.

The council began using the concept in December last year for candidate awareness (see www.showyourlove.co.nz) in advertising and online. In coming months the focus will shift to the voter campaign.

“We have a great concept to engage Aucklanders, and the focus is now on sharing it far and wide.”

Campaign initiatives include the Love Bus (see other media release), an online Kids Voting project in schools, a voter website featuring more information about candidates, and much more social media and community engagement activity than in 2013.

To make it easier for people to vote, local ballot boxes will also be available at council libraries and service centres.

Advertising featuring the ‘Show Your Love’ design will ramp up closer to the election.

“We are keen to take the election ‘to the people’ and get more information out into communities. We want everyone to spread the word, get enrolled and be ready to vote,” Glynn said.

Voting papers will be mailed to all registered voters from 16 September, and people can vote up to midday on 8 October 2016.

Voters can check they are enrolled here: http://www.elections.org.nz/voters/enrol-check-or-update-now

The Kombi is wrapped in the new eye-catching voter campaign look and feel Source: Auckland Council 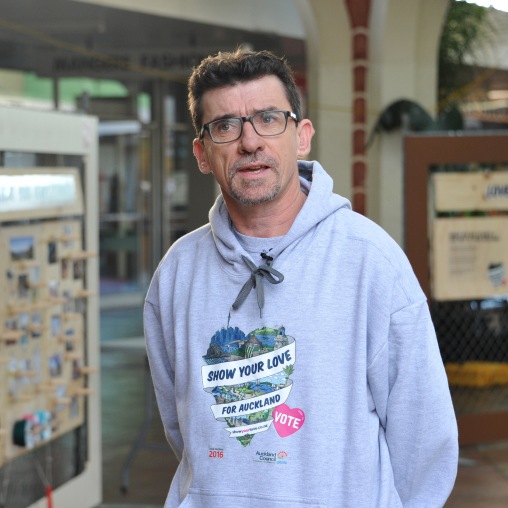 Lucy-Mary Mulholland was working on the voter engagement stand and got a lovely hug from an affectionate Auckland voter Source: Auckland Council