Should have stuck with heavy rail?

The Airport Line has come back onto the debate table (so has Light Rail down Dominion Road) thanks to Campaign for Better Transport’s Cameron Pitches giving a presentation to the Auckland Transport Board.

Presentation to Auckland Transport on Rail to the Airport

The CBT presented to the Board of Auckland Transport on rail to Auckland airport.  We made the following points in this “one pager”.

1. In our view the Jacobs “SMART Indicative Business Case” report underestimates the potential catchment of heavy rail, we assume because of the arbitrary requirement for a single seat journey to the airport.

2. We consider that some of the costs of heavy rail attributed to the airport heavy rail option will most likely be incurred anyway – in particular work required around level crossings.

3. We consider there is a high risk that the predicted Dominion Road journey times for light rail are overly optimistic, depending on the degree of separation from general traffic.

4. Implementation of either heavy rail or light rail from the north of the Airport is likely to be decades away and very costly.

5. Putting aside the report’s assessment of heavy rail vs light rail, we note that the three key problems identified in the Jacobs report do not have to be addressed by a single solution:

a. Constrained access to the Auckland Airport will limit economic growth and productivity;

b. Limited transport choice undermines liveability and economic prosperity for the Mangere – Otahuhu area; and

6. We ask the Board to take the same approach as ATAP in measuring transport effectiveness. In the context of Auckland Airport, the measure would be the potential catchment of public transport users within a 45 minute radius of the Airport. This should not preclude transfers between modes to meet this target and should therefore necessarily examine the option of a transfer at Papatoetoe or Puhinui.

7. We note that the Jacobs report identified that 7,350 daily commuters originate from Manukau and the east, twice as many than that originating from the north and central Auckland.

8. The current Airport 380 bus service connecting at Papatoetoe to rail services yields a fastest possible PT journey time of about 49 minutes from Auckland Airport to Britomart. However, there are a number of issues associated with transferring at Papatoetoe: frequency of service; ease and legibility of transfers, and the lack of a RTN quality right-of-way.

9. It is timely to bring to the attention of the Board that NZTA is currently planning a widening of 20B along the Puhinui Rd alignment for general traffic. 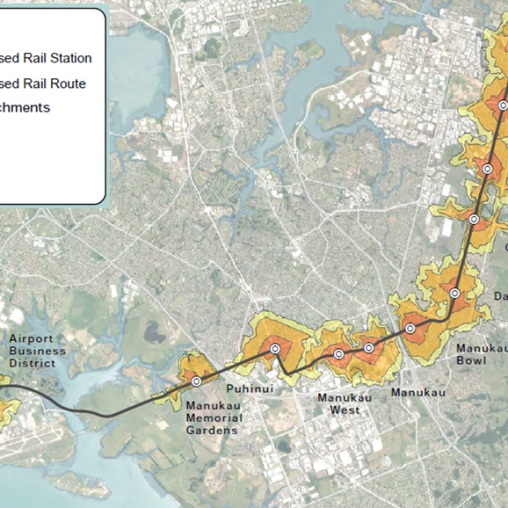 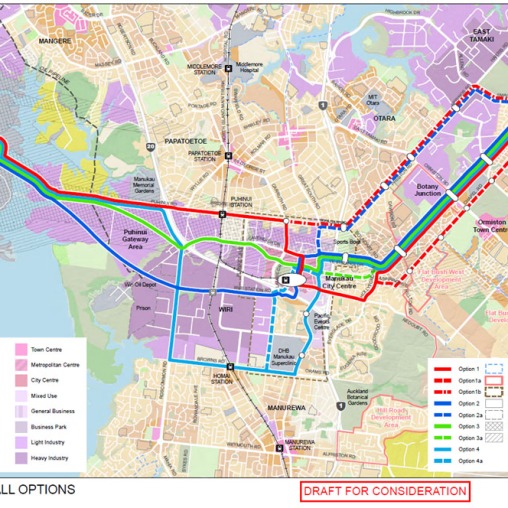 AT’s proposals for the Botany Line to the Airport Source: Auckland Transport

1. As a matter of urgency, AT should work with the NZTA to designate a rail corridor east of Auckland Airport on the 20B alignment with a connection to the main trunk line. This designation work should also consider extending further east to include Botany.

3. Auckland Transport should continue with designating a rail corridor between Onehunga and Auckland Airport.

A more full explanation from Cameron can be read here: Rethinking Airport Rail

The Jacobs report was said to have mistakes prompting Auckland Transport to review the report that covered Light Rail to the Airport. AT are sending a formal response in which I will write up a second post on once it is available.

To be honest I could not answer that question on my own thus Auckland Transport should do a full study again that includes heavy rail via Otahuhu and the Botany Line to the Airport to see which gives the highest benefits in return for capital outlay.

Below is some mock ups of the two Lines with 800 metre wide circles that is a rough guide to the walk-up catchment. I have thrown in some bus lines (grey dots) and a Manukau LRT Loop connecting the entire Transform Manukau area which is projected to house 20,000 people in the 600ha area. 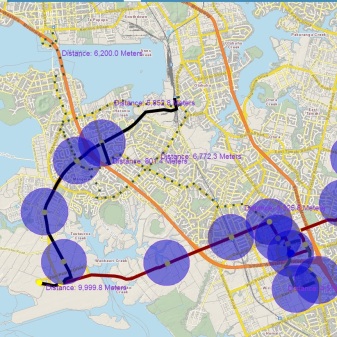 Both the heavy rail option from Otahuhu and the Botany LRT Line. 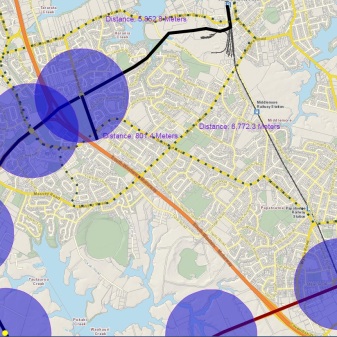 Both the heavy rail option from Otahuhu and the Botany LRT Line. Close up 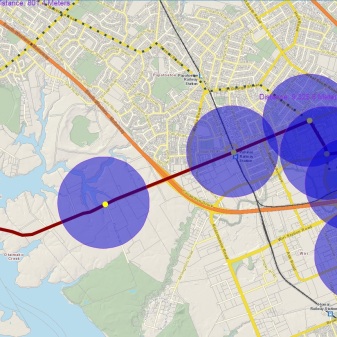 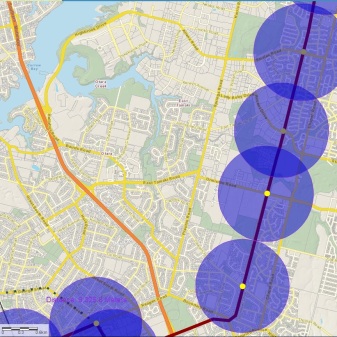 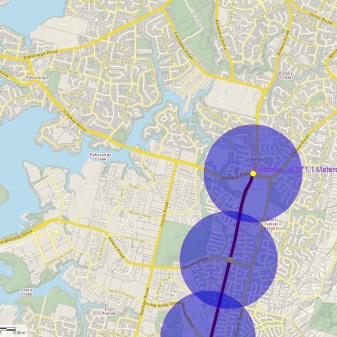 Botany Station. The Line would continue to Panmure Station

Of course busses would be going east-west crisscrossing the Botany Line stations linking up Otara, East Tamaki, Flat Bush and Dannemora hopefully eliminating the need for urban Park and Rides.

Thank you Cameron for putting the entire Airport Line situation back onto the table. Now let’s see if AT do a full reevaluation of options and work out which is indeed best for the City.