I was at a Have Your Say session in Manukau last night after which I decided to take a look at the new Manukau Bus Station which is basically complete.

The bus station itself will not be open until April however, busses are already using the concourse that connects the bus station to the roads either side of it. Below is some of the photos of the Manukau Bus Station:

Close up of Manukau Bus Station. 5 extra bike parks spotted bringing total to 9. Inter City busses load up on this side as well 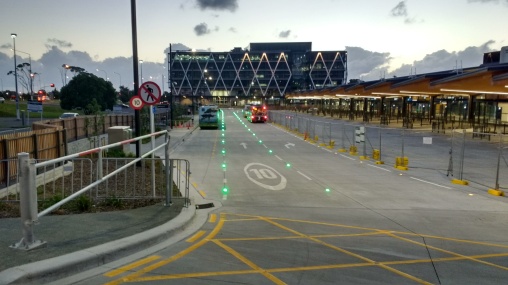 I believe the inter city busses load up on this side

The bus station looks a tad naked and under-utilised without a large apartment tower sitting over the station building itself. The chance for a true transit-orientated development for the moment has been missed but not lost entirely.

We get another TOD chance when the Southern Airport Line is built (Light Rail from Airport to Manukau and Bus Rapid Transit from Manukau to Botany). To serve the Southern Airport Line a third station is built (this time either on Manukau Station Road or the blank parking lot next to the bus station) turning Manukau Rail Station and Manukau Bus Station into one super interchange tentatively named Manukau Central Station.

I didn’t get any photos of the streetscape at Putney Way yet as it is one big construction site. I will get some once the works are complete mid year. I noticed Osterley Way is closed between the bus station entrance and the Putney way intersection. Any chance we can keep it permanently closed and turn it into a pedestrian mall extension of Putney way please!

The Bus Station opens next month and no doubt will be a hive of activity.