Work has started on the upgrade of Bledisloe Lane to deliver an improved city centre laneway and enhanced access to Bledisloe House.

A popular thoroughfare for inner city workers, theatre-goers and tourists, the lane which connects Wellesley Street to Aotea Square has often been criticised for its dark recesses and gloomy, dated appearance.

The upgrade will transform the lane into a brighter and safer connection with new paving, a new glass canopy and façade to Bledisloe House at ground level and includes an upgraded pocket park on Wellesley Street. The existing canopy which significantly limits natural light will be removed in stages between June and September.

The upgrade also aligns with the relocation of the council’s Customer Service Centre from the Civic Building to the ground floor of Bledisloe House later this year. The introduction of new value-added interactions such as self-service kiosks, combined with the new location on the popular walking route, is set to deliver a new standard of service delivery for the centre.

Both projects share the vision of enhancing the public’s experience of Bledisloe Lane.

Auckland Council design champion Ludo Campbell-Reid says the upgrade is one of the many council projects realising the City Centre Masterplan vision to create a vibrant, better connected city centre that showcases Auckland as the world’s most liveable city.

He says Bledisloe Lane is a hugely important segment of what is described as the city centre pedestrian laneway circuit running from Aotea Square to the Waterfront.

“Currently the lane is well used, but its poor design quality does not encourage pedestrians to linger and enjoy the space,” says Mr Campbell-Reid.

“This situation does not fit well with the creative vibrant nature and potential of the Aotea Quarter cultural and entertainment precinct, or the kind of experience we want our Service Centre customers to have.

“Our plans to redevelop the lane, introduce a new service centre and redesign the Wellesley Street pocket park will transform the pedestrian experience”.

The design also considers future upgrades to Wellesley Street and the proposed site of the Aotea City Rail Link Station on Albert Street.

To expedite the construction works and ensure public safety the lane will be closed to pedestrians from late June to late September. Intermittent access will be allowed depending on construction occurring that day however customer access to New Zealand Post, Metro Centre and Bledisloe House main entrance will be maintained throughout construction.

The lane upgrade is expected to be complete later in the year.

Information about the upgrade project and pedestrian access during works is available on the Auckland Council website aucklandcouncil.govt.nz – search ‘Bledisloe Lane’.

I am always a fan of the glass canopy in walking thoroughfares especially if you want to encourage people to linger on days like we having right now. 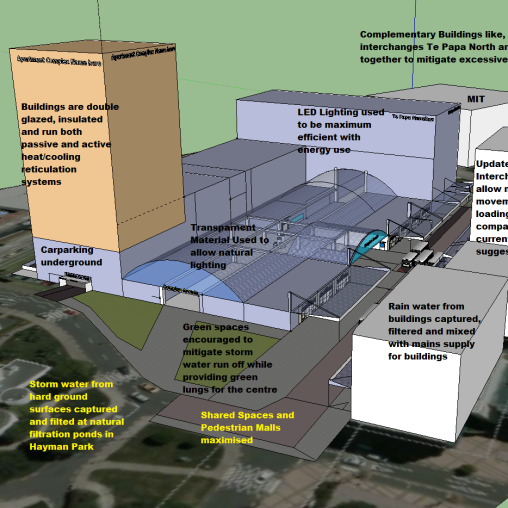