Auckland Transport have replied to my Local Government Official Information and Meetings Act request on the Manukau South Link. The LGOIMA request was technically refused owing to that the document pertaining to the South Link exists, that is no modelling or business case has been done on the South Link. Now that I find somewhat contradictory owing to an email from Executive Manager of Planning and Strategy Peter Clark stating otherwise in an email in May. That email said:

“As to the level crossings and Manukau Rail South connection,  AT will be in a position to go public once these issues have been worked through with Council and the relevant local boards, which we expect to do over the next few months.”

However, if you read the LGOIMA reply it seems Mark Lambert of Auckland Transport is contradicting himself.

I’ll quote the two parts then put the questions I wrote below that.

Auckland Transport has refused your request in accordance to …….. in that the documents requested (by my LGOIMA) do not exist. No timetabling modelling or business case has been carried out by Auckland Transport and no implementation date has yet been identified.

The Manukau South connection is not part of the Long Term Plan (most likely the 2012-2022 version) and is therefore not a current project so no funding has been identified. The proposal for the Manukau South connection is being reviewed as part of the development strategy which has not yet been considered by the Auckland Transport Board. The review has assessed the feasibility and network impacts of constructing a Southern link.

The rest of LGOIMA goes on about a 2006 study done for the South Link when the former Manukau City Council was exploring having the Manukau Line and station built then.

The questions I asked (for your reference)

Specifically if the Manukau South Link is or were to be built and
operating:

How many trains per hour would be running using the South Link in
the: peak, off peak week days, and weekends?

How many passengers is AT predicting (via the modelling) to use the
trains that would go to Manukau via the South Link in the: peak,
non peak and weekends

Would AT use the new EMU fleet, the existing diesel fleet
(especially if Pukekohe has not been electrified yet) or a mix of
both

What is the cost of build the Manukau South Link (both just the
link (track and wires) itself and any “compensation” to Port of
Auckland for the loss of their siding (at the north end) at their
Wiri Inland Port Facility)
Does Auckland Transport have a business case drawn up for the
Manukau South Link and/or has it been presented to Auckland Council
as of yet? If the business case is drawn up is able to be released
into the public domain?

If all T’s are crossed and all I’s are dotted when would AT like to
have the South Link built and operating ideally.

Does Auckland Transport have the funding currently available to
build the Link or does AT need to go to Council for extra funding.

You will have to forgive me if I am somewhat confused by Lambert’s reply which in itself contradicts what he is say, as well as previous correspondence over the last 18 months over the South Link.

I am aware the Rail Development Strategy is being developed (which you would think has modelling and business cases would be done) and I believe it is meant to be presented to the Auckland Transport Board (after delays) either this month or possibly next month (Pukekohe Electrification and the 2015-2025 Long Term Plan debate would understandably put the presentation of the Strategy back). As noted before that Rail Development Strategy will have the layout which would determine the South Link.

I also know the Otara-Papatoetoe Local Board in their Area Plan draft made note of the Manukau South Link as a 6-30 year non funded aspirational project. It was that piece of information that spurred on the LGOIMA request in the first place. For the Local Board to say that I was wondering in their Area Plan write-up and Stakeholder meetings (Auckland Transport is a Stakeholder) had met with AT to get a briefing on the South Link situation that in turn influenced the Local Board placing it as a 6-30 year project. That is AT had done the modelling and business case (per the Peter Clark email) but with no funding available in the 2012-2022 Long Term Plan it was decided to kick the South Link into the 6-30 year box rather than the 5-year do it now as funding is available box (hence my submission to get the South Link placed into that box).

And finally Peter Clark’s response that Auckland Transport would be going public soon on where AT stands with the Manukau South Link (and rail crossing separation which did get mentioned in the Mayor’s 2015-2025 Long Term Plan presentation last week).

All in all it seems we have a confused and messy situation here with the Manukau South Link. Something that is not helpful in light of the Mayor delivering the 2015-2025 Long Term Plan that had 10 Spatial Priorities.

What are those Spatial Priorities?

From the Mayor’s Presentation 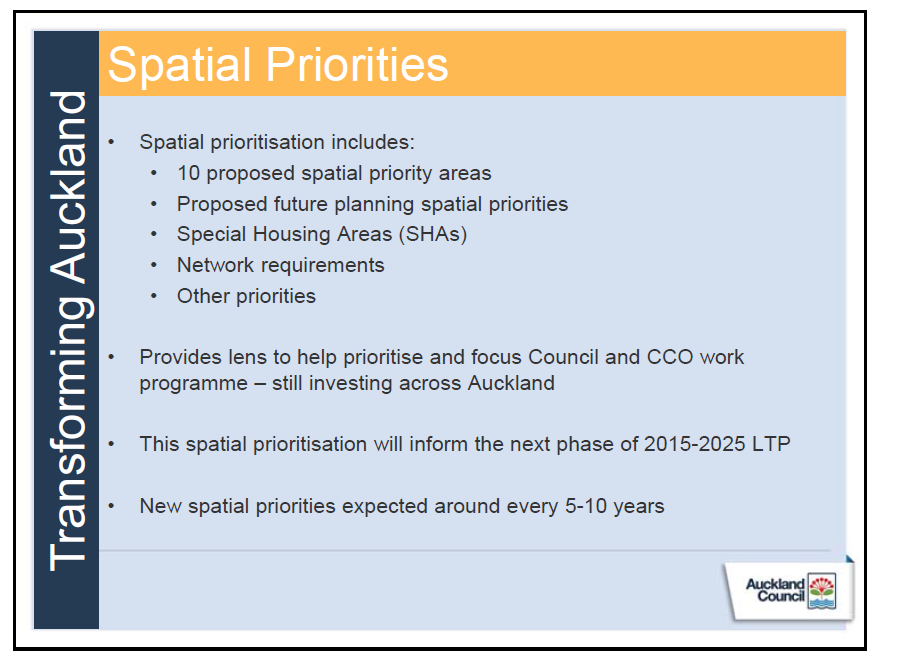 So major growth along the Southern (rail) Line with those SHA’s and Spatial Priority Areas but Auckland Transport seems to have itself in a muddle with a missing piece of crucial infrastructure – the Manukau South Link that links up Manukau City Centre to the Southern Auckland population growth areas which are “zoned” for along the rail corridor NOT the Great South Road corridor nor motorway corridor. So the 33 Great South Road bus would be pretty near useless in linking up the South to Manukau if the growth is along that rail corridor.

I think it is time to get this all cleared up and everyone onto the same page once and for all. I will contact the Deputy Mayor as Penny Hulse is also chair of the Auckland Development Committee that will oversee these Spatial Priorities and kindly request a joint conference between her Office, Auckland Transport, the Southern Local Boards and respective Ward Councillors, and (hopefully) myself to get everyone on that same page and wave length over this piece of infrastructure.

More on this as information comes to hand.

My Submission to the Otara-Papatoetoe Area Plan Draft