You have until Friday to get your feedback in

I have sent my feedback in opposing the entire East West Connections proposal by both NZTA and Auckland Transport. I will put what I sent to both authorities into this post.

But first from Cycling Action Auckland:

No thanks – no Onehunga Foreshore highway!

CAA will strongly oppose the proposed project, and we need everyone to also clearly speak out against it. And this time we want AT and NZTA to clearly state who and how many support or oppose their scheme – it is not acceptable to again summarise opposition in the style of “some people have voiced concerns”.

Voice your opposition directly to: eastwest@nzta.govt.nz

Yes, their website does have a feedback form – but it concentrates on an only somewhat related bus proposal south of the harbour, and doesn’t even provide fields to enter your opinion on this highway scheme. (Despite them clearly asking for feedback on this too, and despite this being the much more controversial project!).

So please, tell them your thoughts on this directly, by email. Ideally, give them your name and address as well, so they know it’s real people disliking these concepts.

Ten reasons to oppose this proposal:

The feedback I gave NZTA and Auckland Transport:

Owing to your feedback portion of the East West Connections web portal being disingenuous and actually not allowing feedback on your latest proposed East West Connections along the Onehunga Foreshore I am going to give my feedback here.
I would ask that on receipt of this feedback that you acknowledge via email that you have received and read this feedback thank you.
I Oppose your East West Connections proposal
I oppose your entire East West Connections including the “transit” provisions along Massey and Mangere Road for the following reasons:
Source: http://caa.org.nz/no-thanks-no-onehunga-foreshore-highway/
More reasons I oppose the entire project:
Source: https://voakl.net/2015/06/17/hot-topic-surprise-a-motorway-is-back-east-west-connections-feedback-sought/
As for the transit lanes along Massey and Mangere Road.
They will not work if you do not four-lane Massey Road from the BP-McDonalds site to the State Highway Interchange further west. The reason being is that the road along there narrows down to two lanes and causes bottlenecks back east towards and along Mangere Road. Unless you plan to four-lane the entire stretch of Mangere and Massey Roads (to SH20 interchange) your transit lanes will be redundant and offer no savings to trucks nor buses or even cars that use this route (as I do semi regularly).
As an alternative to what you NZTA and Auckland Transport have proposed for the East West Connections I implore you to reinvestigate and model the original Options A and B please. While exploring the feasibility of four lane-ing Massey Road to remove the pinch point at the BP site thus allow the transit lanes to operate more efficiently than what is currently proposed.
Below are those two options: 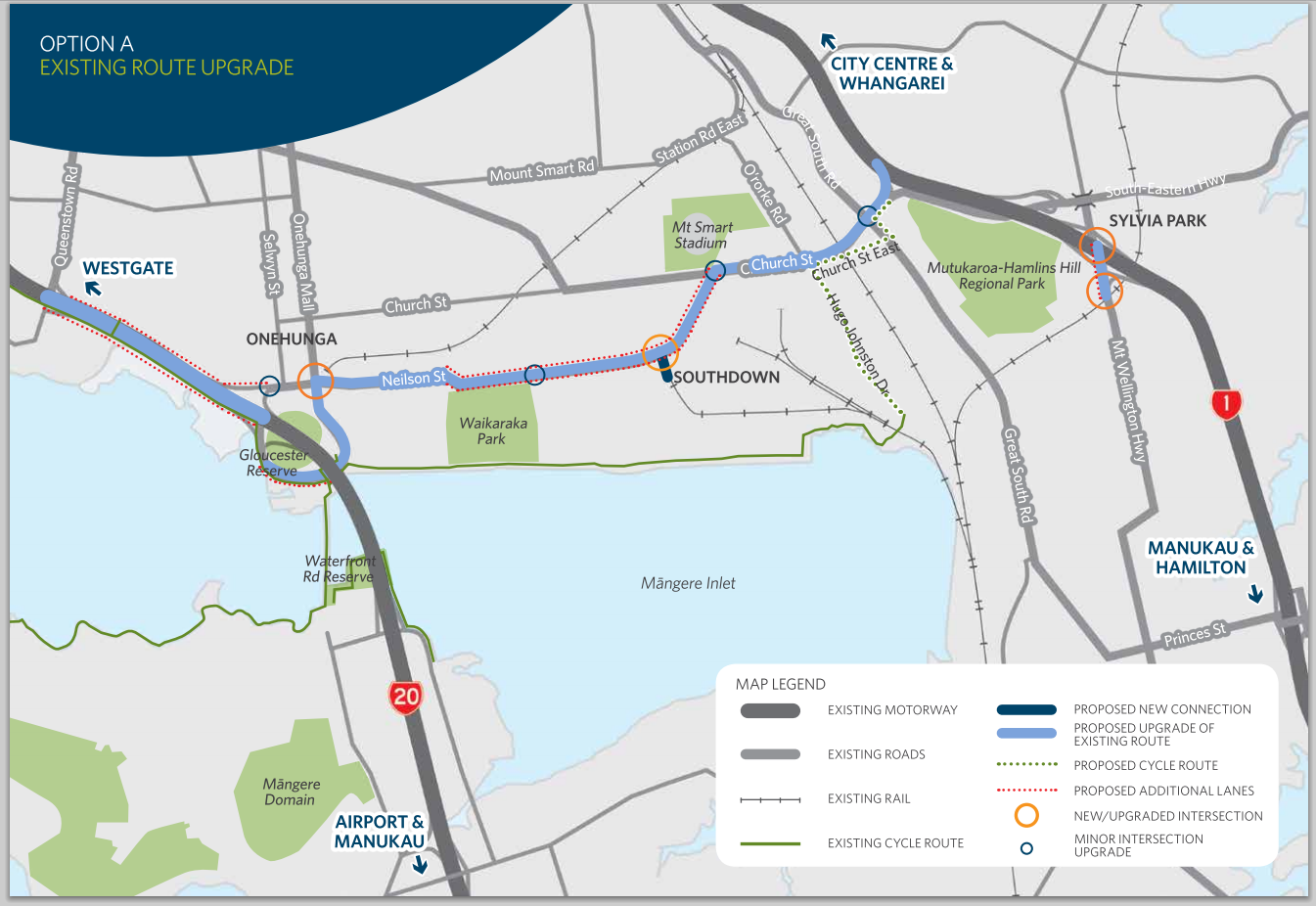 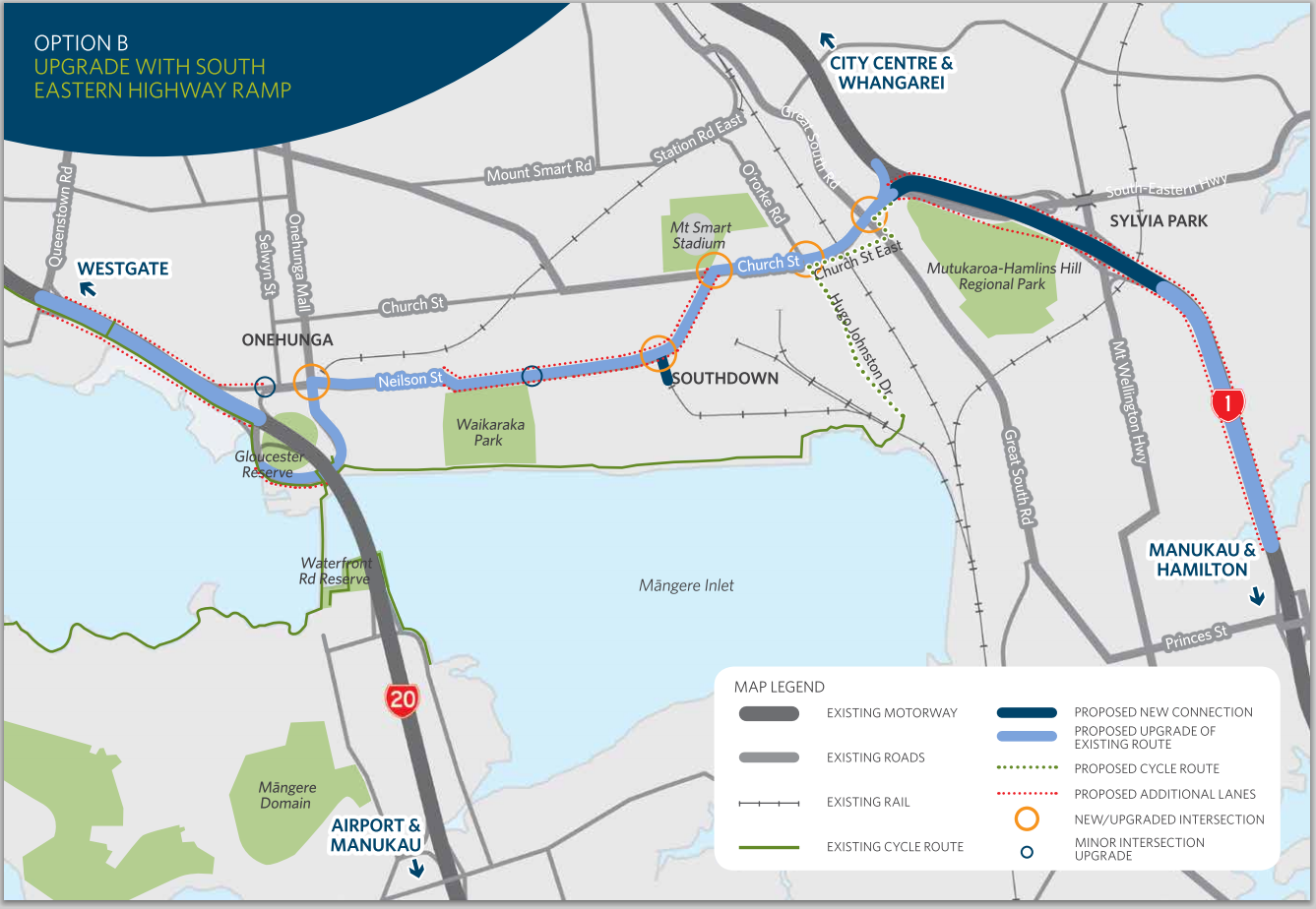 https://voakl.files.wordpress.com/2014/10/nzta-east-west-option-b.png
My personal preference as in my original feedback is for Option B to be carried out for reasons I have mentioned above.
In acknowledging my feedback I ask NZTA and AT to

Remember folks you have until Friday to get your feedback in.