Mature city presents its own challenges

In March I wrote a post on how the city simulator Cities Skylines can given some basic urban and transport planning lessons that cities face in real life (#CitiesSkylines Lessons with Planning). At that stage when I wrote the post Neo Layton City was at around 78,000 people so while not at the founding stage it was still in the rapid growth stage with both an established population and more people and industry arriving in the city. Fast forward to June 14 and Neo Layton City now hold 186,000 people with a mature economy and transport system. At this stage of the game the city is consider mature with Greenfield expansion slowing down and focus turning urban renewal projects as well as rejigging the transport system you first started laying out when the first sod was turned all that time ago.

With Neo Layton City at the mature stage with people (citizens and tourists) and freight moving about those bus lanes you might have skimped out on start becoming real important. So does things like tram lines and even metro rail (subway or heavy surface rail). As I said in my #CitiesSkylines Shows Auckland Transport Bus Lanes:

In light of yesterday’s Auckland Transport to Miss Bus Patronage Targets maybe our transport engineers in Cities Skylines should pass a course in building a large city in the game with less than 50% of the traffic map in condition red (think the Southern Motorway parking lot at 5pm on a Friday afternoon). It with a bit of practice can be done so that your city does not seize up from traffic snarls. Yes there is still “congestion” which is the sign of a busy city but the city is still moving rather than seizing up like Auckland does.

In my current city – Neo Layton City there are four spots where I get a condition red on the roads with three of those spots due to industrial traffic from a near by industrial complex. The fourth spot is when the stadium finishes an evening game and everyone wants to go home.

I went back over the maps last night to check the traffic and transit situation. Yep those four traffic congestion spots were still there while the transit system does need rejigging given some of the routes (especially tram lines) were first placed when the City was under 50,000.

A recap on the transport system in Cities Skylines:

Some facts with Neo Layton City and in wider extent Cities Skylines:

Oh and the international airport now has three subway routes running through it taking people to the City Centre in the north, Manukau in the east and Papakura in the south. 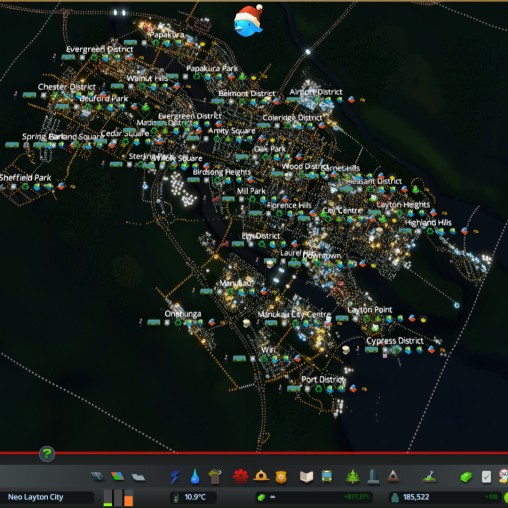 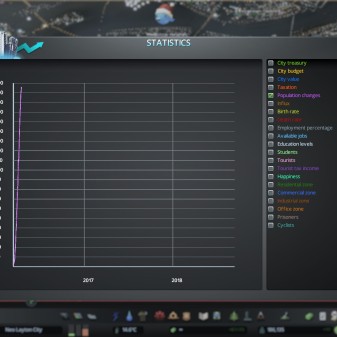 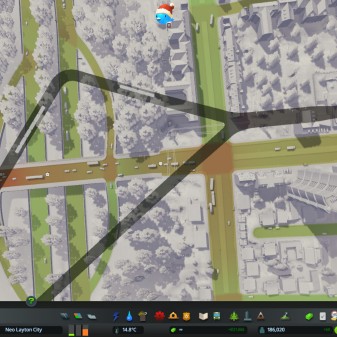 Roundabouts. Also Metro Lines 1 and 2 before heading under the river 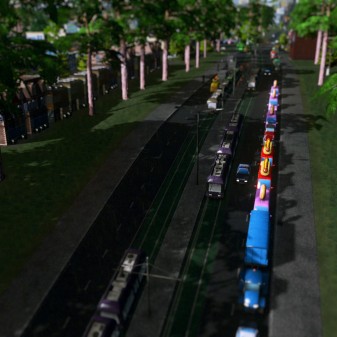 Rush hour traffic backing up heading to the industrial complex. Trams at work as well

Roundabouts can cause congestion.

One of the 4 major congestion points. The road serves as a link between the industrial complex and the rest of the City.

End of the line for Metro Line 1. Usually bus or tram stops will be near a subway station to allow transfers either way 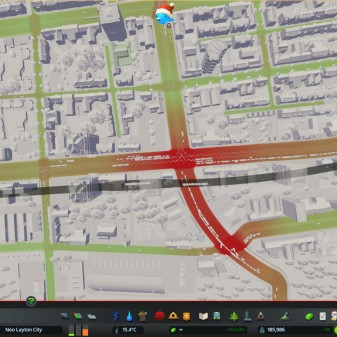 Again some congestion near a motorway interchange. This time Papakura. 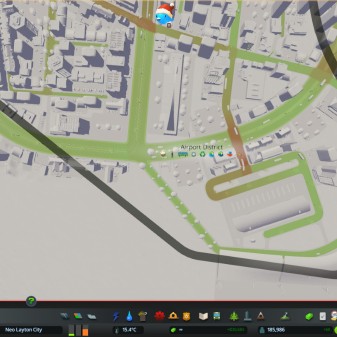 The international airport and space elevator tower with subways. Notice the roads are in condition green with congestion unlike Auckland International Airport.

Such a wonder to have your rail system backed up with freight trains. Yes the city moves most of its freight by rail 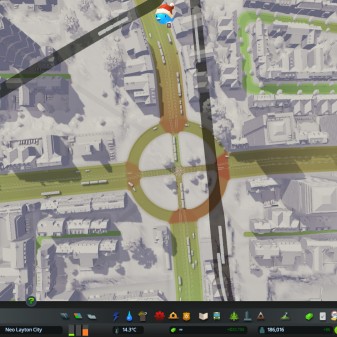 Some congestion entering the western side of the City Centre.

You can see areas that run well with the traffic and areas that do not.

Now about that pig’s arse of an intersection at the eastern end of the City Centre:

The area showing congestion is better than earlier where all the roads in this shot were red. What got the congestion more manageable (and lessened the ranting from the citizens) was some very quick wins that did not require ripping up the area. What I did in order to get the area moving again:

For the most part with intersections near a motorway junction (yep motorways cause congestion folks and act as drag on productivity) the congestion issues can be mitigated with better traffic light control phases. Something I must get around to eventually.

While people taking mass transit in Neo Layton City is considered good I know some of the routes especially the tram lines need rejigging to get better use out of a system that costs the budget $115,000 a cycle.

The bus system costs the most followed by the subway system then the tram lines so while the tram line is the cheapest to run budget wise it also carries the least out of the three modes as seen below:

Using the Transport Lines and Improved Public Transport mods I can open up the mass transit management system and both inspect how the system is running as well as controlling how it runs (including fares, capacity, time and speed). 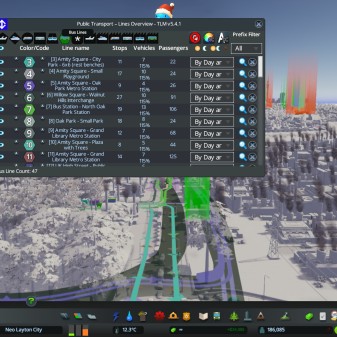 Basically to make the bus and tram system more effective I am going to have to through each line one by one to check:

So like Auckland Transport I am going to have to spend some time: following the existing routes, check the loadings, check for traffic congestion and most likely go through an entire New Mass Transit Network system with the busses and the trams. This exercise does give me appreciation of what the public transport designers have gone through with the South Auckland New Bus Network due to start in October.

While I am going to be working through the new network of course brand new routes will still be built to fill in holes as well especially as Greenfield inspection continues. 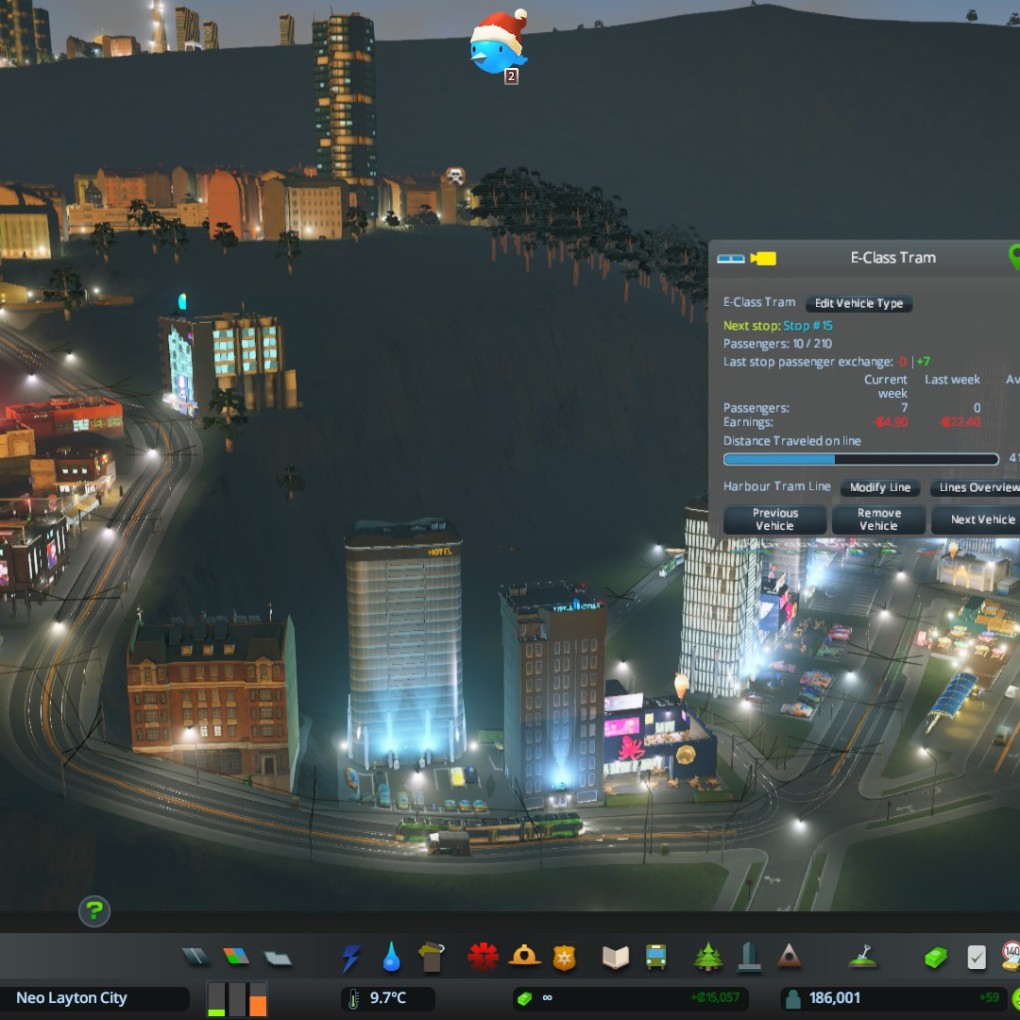 Downtown Neo Layton City and Neo Layton Point. Both contain large tourism and leisure district areas which means PEOPLE at night and in the weekends. So a night transit system is a must.

The busiest bus station – The City Centre Bus Station with tram stop and subway stations nearby. 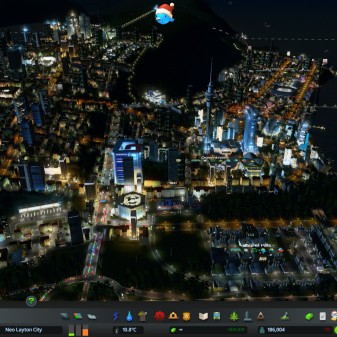 Downtown and the City Centre 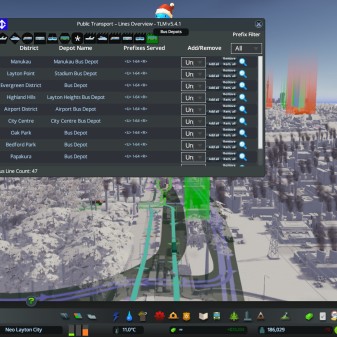 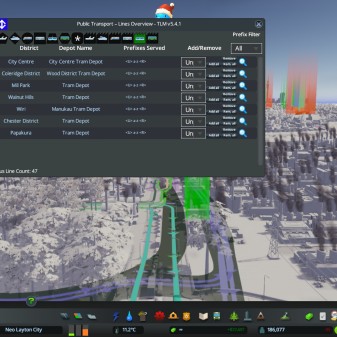 Mass transit inspect for an individual route and what other stops are near it serving other routes (cue transfers). 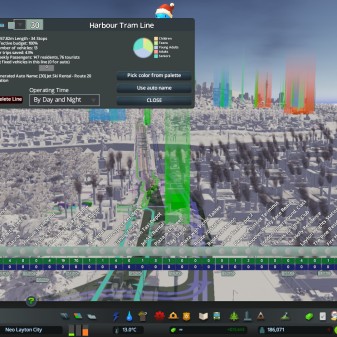 The Manukau – Airport Bus Line. It is the longest bus route but also a busy one. 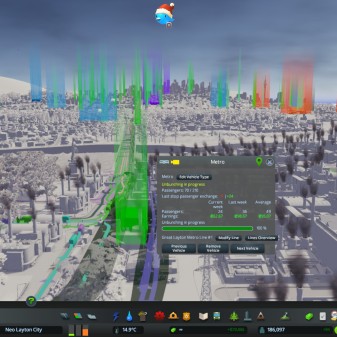 If you want to get to close as to a real city in running a mass transit system the above photos show how close you get in managing the individual components as well as the system as a whole via the Budget controls.

And to be honest I get more enjoyment (and frustrations) out of the controlling of the public transport system than plopping down the zones and infrastructure. To add to the enjoyment getting right down to person level to see the City from a first person point of view is fascinating as well. 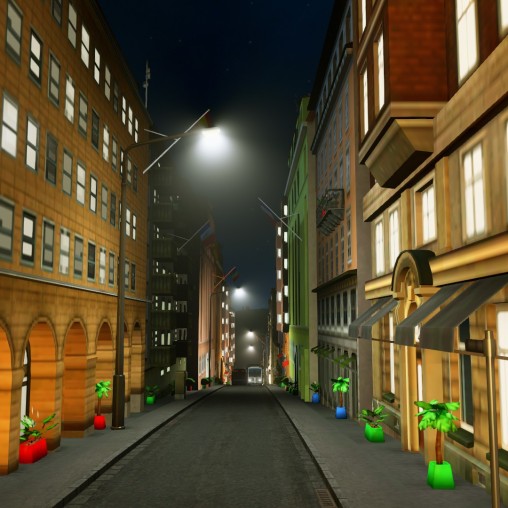 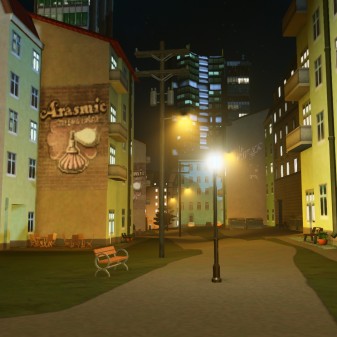 6 lane arterial road with buslanes and parking. Oh and an overhead sign 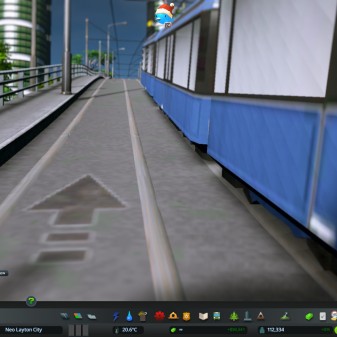 Back to Bedford Park Interchange

As you can see still lots of green fields

Walnut Hills Interchange. Behind the buildings is the Bus Station and subway station. Here Metro Lines #2 and #3 Originate and Terminate.

Argh get out of the way

So for the next wee while I will be focusing on some 90 bus and tram routes through a mature Neo Layton City and reworking them to be more effective and efficient moving people around the City. And yes lessons are learned in doing this as you do with other Urban Geography and urban transport points playing Cities Skylines.

And yes Max scofflaws thanks to the Rush Hour mod do happen. Scofflaws meaning: