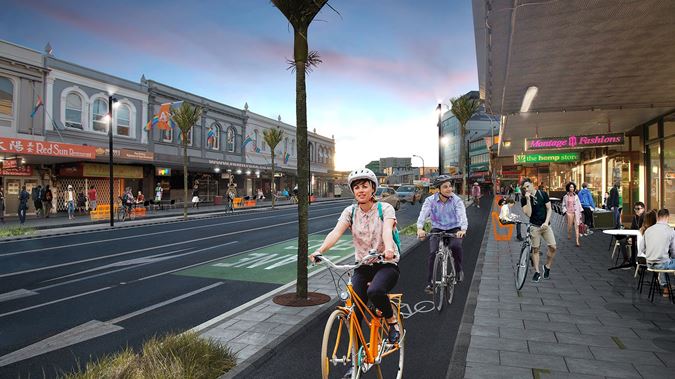 One of Auckland’s most iconic and eclectic streets is set for a makeover. Auckland Transport and Auckland Council today revealed plans for proposed changes

The renderings look very good and the new cycle lanes and pedestrian paths will be heavily utilised especially when the K’Road City Rail Link Station opens up. However, those bus lanes need to be 24/7 given the amount of bus traffic that plies that stretch and the amount of off-peak users on those busses. Something again that will only increase when the CRL is operating from 2023.

Manukau City Centre with its wide boulevards are ripe for this kind of transformation as well. Something Panuku Development Auckland will be keeping in their minds as well as mine too.

If I had to pick a road in Manukau that would be the best place to start? Ronwood Avenue given it is both a main bus access link from the north and a pedestrian/cycle link across the east-west access of Manukau City Centre as well. The next road after that would be Druces Road in the south of Manukau as that links Manukau City Centre to a key residential area AND the eastern flanks of the Wiri industrial complex.

Manukau Station Road is another candidate but I would prefer the Botany Line Light Rail Transit system be drawn up and the route protected first to save a case of ripping things up a second time (the build once mantra).

Lot’s of potential here with K’ Road and potential that can be translated into most of the Metropolitan Centres as well.