Just a mere eight days ago I had reported that the Manukau Special Housing Area (8 Pacific) had started with earthworks under way (Manukau Special Housing Area (8 Pacific) Under-way). Well 8 Pacific is certainly under way but the total home yield went up to 1,100 homes (terraced housing and apartments) and could go even higher depending on how high the apartment buildings go (it is a Mixed Use Zone under the Unitary Plan so you can go for six to eight storeys) according to the developers today.

From Trio Communications (on behalf of Changda):

A major housing project, that also includes potential for hotels, is underway right next to the Vodafone Events Centre and Wero Whitewater Park.

The previously vacant 9.4 hectare site is being developed by Changda International Development (Changda). It is a New Zealand subsidiary of a multi-billion dollar Chinese construction group that has won awards for new construction technology and has International Organization for Standardization (ISO) ratings for its quality, environmental, occupational health and safety systems management. In China, Changda Construction Group is known for not only residential, but also commercial, industrial and infrastructure development.

Group chairman Xu Pengqiang is in New Zealand to meet with Auckland Mayor Phil Goff and show him the development at Manukau. He is accompanied by the group’s board directors and major investors including Xue Jinxing, who has diverse education and private training businesses and is interested in investing further in New Zealand. Mr Xu says New Zealand is a beautiful country and its people are friendly and kind-hearted.

Its economy is running strongly compared with many other western countries and Auckland, with its urgent need for housing, fits Changda’s vision to develop livable homes for people no matter in which country they reside.

Changda has also started earthworks on a 40ha, 500 section residential development in Orewa. Mr Xu says he and his directors do believe there is an immediate and growing opportunity in the New Zealand residential property sector.

The Manukau project is called “Pacific Gardens” after its comprehensive landscaping and its planned connections with the nearby Auckland Botanical Gardens. Pacific Gardens will be a vibrant urban community that embraces people rather than vehicles and includes the planting of trees to produce edible fruits. It will also have prominent greenspaces, a children’s playground and other community amenities. A community and residents’ association will create a sustainable and quality living environment.

Pacific Gardens, which has Special Housing Area (SHA) zoning, will eventually deliver more than 1100 homes into the Auckland market. Some of those homes will be social housing and more are targeted at first home buyers, meeting SHA requirements. A diverse mix of housing will create a similarly diverse community with homes for professional couples, empty nesters and families across all cultures and demographics.

The vision includes being a catalyst for urban transformation in the wider area, with the emphasis taken off motor vehicle accessibility and put on to providing a safe, environmentally attractive and community driven neighbourhood that successfully mixes ethnicities, ages and cultures.

The company is also in early discussions with a hotel operator and, with the site’s proximity to tertiary institutes and transport options, the potential for a managed student accommodation block is also being explored. Changda’s New Zealand general manager Liu Yanbing, says earthworks commenced in October and building of housing is expected to start in April or May next year. While stage one of the five-to-eight-year development includes 21 terraced townhouses and 21 apartments, the target is to have some 200 homes in the market each year.

The configuration of initial homes will range from studio apartments to four bedroomed terraced townhouses to meet the market and they are expected to start being occupied from early in 2018. From earthworks through to completion, Pacific Gardens is using New Zealand companies and labour. Mr Liu says Changda’s presence in New Zealand has already created more than 200 jobs and he expects this to grow to around 600 during the next few years. Changda, unlike other large developers that on sell developed land packages to housing construction companies, is fully funded to complete the entire development through to completion. Since establishing its New Zealand office in 2013, Changda has aspired to embrace and respect New Zealand culture, asking local iwi Te Ākitai Waiohua, Ngāti Te Ata and Ngāti Tamaoho to bless the land and to collaborate on important cultural ingredients in the overall development master plan.

The company is also supporting the nearby Ra Wiri Residents Association and the Wiri Central School as its recognises the impact that more than 1100 homes will have locally.

Changda is a large Chinese-owned property development company that is developing a large masterplanned residential community project of more than 1100 homes and hotels on 9.4 hectares at 834 Great South Rd, Manukau.

It has a sister company called Changda International New Zealand Ltd, which is developing a 40ha residential project in Orewa. Commencing New Zealand operations in 2013, both companies have an ultimate parent company in China called Weifang Changda Construct Group, which was founded in 1949. Today the group is rated as one of the Top 100 competitive construction enterprises in China and has more than 3,000 direct employees.

Last year the group’s annual turnover was around NZ$2.1 billion, primarily in the construction sector. Changda has ISO standards for quality management, environmental management, occupational health safety management systems and a GB/T code for quality management of engineering construction enterprise. Its projects range across a huge spectrum including residential, commercial, industrial and developing infrastructure. Changda is also at the forefront of developing new technology for the construction sector. It has 30 national patents, numerous national science and technology awards for technology innovation and in its home province of Shandong more than 50 technology innovation awards for construction. The wider group, which includes the two New Zealand companies, also has contracts to build internationally including in the United Arab Emirates, Israel, Guinea-Bissau, Thailand, Guyana and Hong Kong.

Most impressive bringing the yield right to 1,100 in the southern area of the 600 hectare Transform Manukau urban regeneration program overseen by Panuku Development Auckland.

One thing Changda might want to reconcile is that they say their development will take emphasis off car accessibility but their website for Pacific Gardens states clearly that Manukau to the City Centre is 25mins by car. Umm it is actually double that in the peak periods with it being even worse on a Friday afternoon. I think the selling point should be FIVE minutes to Manukau City Centre and ~35mins from Manukau to the City Centre by train. 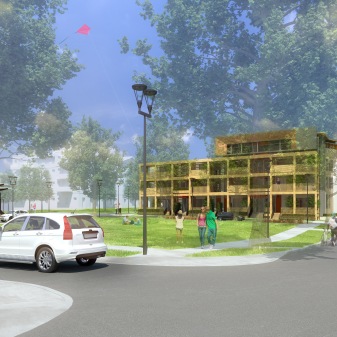 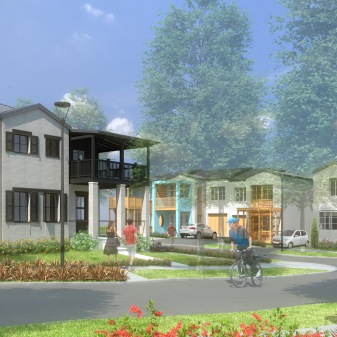 In any case the development again is quite impressive with I understand another ~130 apartments development also on the way by another developer near the Pacific Gardens site.

Panuku did state they wanted more residents in the Manukau area to evolve the economy from a 9-5 weekday economy to full economy including weekends. I would estimate based on three people to a dwelling average (factors small and large dwellings) that the development would house 3,300 people at the minimum. This is remembering the Transform Manukau area is projected to hold 20,000 people through the life of the regeneration project.

Busy times ahead and the Botany Line from Botany to the Airport via Manukau is going to be needed rather now than twenty years time as projected in the ATAP.