I caught this little gem from the Herald this afternoon:

How will our biggest city look in 30 years’ time?

“That’s an unimaginable city, it’s a horrific city where people are part of the machinery,” he says. “I like a bit of chaos. Chaos is more exciting. People like intimate spaces. People like to walk. People want to see the church at the end of the road they are walking along. They want to see the city around them. They want the city to be about them. That Blade Runner type of modern city scares me.”

What is planned for Auckland over the next two to three decades is more Back to
the Future than Brave New World, he says. A place where pedestrians and public transport rule. Where alleys and open spaces take precedence over cars. An inter-linking set of walkways lined with shops and restaurants, joining old and new city parks, creating people spaces above our motorway junctions and evolving a Kiwi urban lifestyle where residents can see the beautiful buildings and distinctive surroundings that give Auckland its character.

Difficult to imagine? The beginnings of this Auckland City of the future is around us now. Take the shared pedestrian/car spaces of Fort Lane and Elliott St. The family-centred parks and promenades of Wynyard Quarter, the rebuilt Auckland Art Gallery, Britomart and Te Wero bridge with its steps enticing children to dangle their toes into the Waitemata Harbour. Auckland City has been undergoing a transformation over the past seven years. Expect to see more of the same over the coming decades.

Let me quote this again: “Quay St will change from a car-dominated road to an important meeting and greeting place and a world-class waterfront boulevard.“

What Ludo Campbell-Reid and his urban design team in Council are doing is what alongside Deputy Mayor Penny Hulse, supporting Councillors, Generation Zero, Transport Blog, myself and fellow “allies” is “nudge: Auckland into the 21st Century our of its 1950’s auto-dependent past (The Auckland Project?).

However, as also noted in The Auckland Project(?) post and in the recent “World’s Most Liveable City?” post parts of Auckland seem to be striving to reinforce that 1950’s auto-dominated road first approach that would defeat a 21’s Century dream like Ludo’s.

Just a reminder this is what Option “8” is for the East-West Link that is haunting Auckland at the moment:

One step towards the 21st Century as Ludo alludes to but a massive leap back over the 1950’s cliff with stuff like what is being proposed above.

Continuing from the Herald:

There are plans to transform the inner-city roads already housing whole communities into narrower traffic lanes with green spaces for children, such as Hobson St which is already home to 10,000 people. He would like to see a new downtown school, Quay St to become a tree-lined boulevard on the waterfront, with room for some cars and light rail heading up Queen St.

He points to the Vinegar Lane project, currently underway in Ponsonby, as a game-changer for urban living. Built with a supermarket below, surrounded by individually designed terraced homes and apartments with rooftop gardens, courtyards and offices, it is a village of its own all in the same block.

“In many cities now the space above the ‘big box’ stores and supermarkets are filled with apartments. Those big retail stores need people in them, and we need space.”

A note for people to look and participate in The Auckland Design Manual.

And finally one more quote from the Herald

The money for the redevelopment of the inner city is coming, he estimates, on a 4:1 private, public funding mix. Auckland Council has $750 million to $1 billion earmarked for improving the city centre over the next decade.

There will be big changes too, he says, in suburban Auckland as the new higher density rules allow for more townhouses and apartments in the currently struggling town centres.

And this is my big warning which you can read in full here: Looking at Developing a 21st Century Auckland – Series – Surburbia. As Brent Toderian said in his recent presentation which Ludo chaired recently “ and:

“The Goal: A complete downtown (sustainable, resilient, lively, healthy and vibrant,); and a COMPLETE City!”

Thus upwards of $1 billion of ratepayer money over 10 years being “spent” into the CBD will annoy the wider city to an extent Council WILL lost the battle with the suburbs in regards to both Urban Planning/Design and Urban Development. However (before I get all the Comm’s people emailing me), that need not be the case (losing the battle and annoying the suburbs). All it requires is Council to be proactive in this current term  and get cracking with the Area Plans alongside the community.

Actually rather interesting that Ludo did mention ” money for the redevelopment of the inner city is coming, he estimates, on a 4:1 private, public funding mix.” As that is the ratio I was calculating that would needed for “Manukau’s 21st Century Development” – something as mentioned in the post that will need to start soon if Council wishes to “win the battle” with the Southern Auckland suburbs. Manukau is the South’s beating heart and one of two arguably actual second tier centres (or Super Metropolitan Centres) behind the CBD (the other being Albany).

So an interesting piece from Auckland’s design champion Ludo Campbell-Reid on his vision for a 21st Century Auckland. A bugger we still have the 1950’s auto-dependent dinosaur haunting us at every turn we make going forward.

While I was writing this post, Brent tweeted this which is in his presentation as well:

The success of building real “downtowns” in the suburbs is dependant on successfully addressing scale, mix & “place.” pic.twitter.com/dz5O7aOX5f 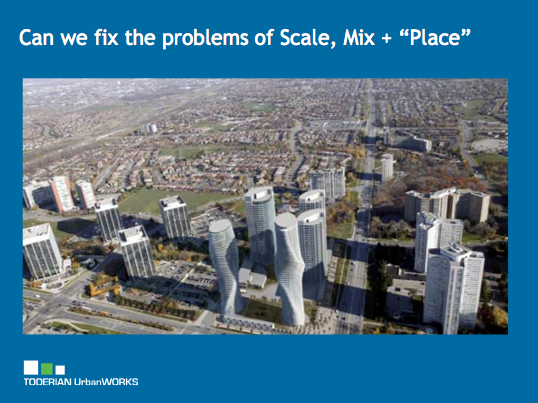 Note: The photos, Sketch Up,and Pencil drawing works is my own intellectual property thus it is under Copyright. The rest is either referenced to Brent Toderian of Toderian Urban Works, Auckland Council or from my own cities in Sim City 4: