On Saturday I was honoured in being alongside the wider media contingent to witness the formal opening of the brand new Onehunga Foreshore that runs next to State Highway 20.

While some might need to learn to give a speech under five minutes so you don’t lose half the public watching the event was certainly most memorable given the history of Onehunga as told at the beginning.

The Onehunga foreshore officially opened on Saturday 14 November, with the $30m development providing Aucklanders with their first significant access to the Onehunga seashore since the 1970s.

The joint Maungakiekie-Tāmaki Local Board / NZ Government project has created 6.8ha of parkland between SH20 and the Manukau Harbour – with new beaches, a boat ramp and turning bay, and a pedestrian/cyclist bridge linking the foreshore to Onehunga Bay Reserve.

“After decades of advocacy and involvement from the people of Onehunga, followed by a three year construction programme, it’s wonderful to finally open up access to newly created beachside recreational areas and facilities – all within walking distance of central Onehunga,” says Simon Randall, chair of Maungakiekie-Tāmaki Local Board.

“This will become a popular walking and cycling route, just a stroll from Onehunga shops to the  lagoon and reserve, and then a short walk across the new overbridge to the large beachside park and tracks,” says Mr Randall.

The NZ Transport Agency’s Auckland Regional Director, Ernst Zöllner says the Agency is delighted to have reconnected people to the water and helped make the community’s long standing vision for this foreshore a reality.

“The government’s significant $19m investment in this new urban amenity is part of a broader commitment to addressing the impacts of transport projects. We greatly value our partnerships with local communities and recognise the importance of Onehunga not only to Auckland, but New Zealand’s early history.”

The local board was joined by Mayor Len Brown and NZ Transport Agency and jointly opened the new reserve at 11am, 14 November. Following the pre-dawn ceremony from mana whenua and civic opening, community-led water-based activities took place.

The new name gifted to the foreshore park by mana whenua will be revealed, along with striking new artworks.

Ted Ngataki’s wayfinding carving navigates the surrounding landscape from a Māori perspective. The artwork celebrates the layers of mana whenua embedded in the foreshore location.

Bernard Makoare’s stunning bridge panelling is a contemporary modern expression that celebrates the nature of the sea at full tide and the mudflats at low tide.

Local board member Brett Clark said that the completed project has very much benefited from the knowledge and input of the Onehunga Foreshore Working Group, including representatives from The Onehunga Enhancement Society (TOES).

“We’ve enthusiastically debated the detail, but all along the people of Onehunga have been strong supporters of this project, with close to 1000 supporting submissions received for the original resource consents application.”

“The project successfully reconnects Onehunga to the sea, and recaptures the biodiversity and recreational opportunities that were displaced when the motorway was built across Onehunga Bay in the 1970s,” says Mr Clark.

Across the motorway, a new festival lawn adjacent to Onehunga Lagoon will be home to the Onehunga Bay Festival in March 2016.

BACKGROUNDER:
Onehunga Bay through the years

Onehunga Bay was an important area for Māori gardening, fishing and occupation before Europeans arrived in New Zealand.

There were large Māori settlements there in the early 19th century and by the 1840s, the beach was a significant port where produce from the various tribes around the Manukau was traded with settlers in the new town of Auckland.

In the latter part of the 19th century, the bay became a centre for the fledgling timber industry, with logs from the Waitakere coast being milled there. The Onehunga coast was dramatically modified as Auckland grew, and the coastal esplanade at Onehunga Bay became a pathway for critical infrastructure such as power, gas, water and telecommunications lines.

In 1975 the Ministry of Works extended the Mount Roskill to Wiri motorway across Onehunga Bay. This work involved the construction of what is now known as SH20, a lane called Orpheus Drive, and the creation of the lagoon.

At that time, a schematic drawing illustrating what future development on the seaward side of the motorway might resemble showed reclaimed land, with open space and pedestrian connections to the foreshore.

For decades the Onehunga community advocated for that vision to be realised. These aspirations were progressed when the New Zealand Transport Agency was preparing to build the second motorway bridge between Onehunga and Mangere.

The Transport Agency assisted the community to develop its vision for the foreshore. In 2009 the restoration project was adopted by the council, with the Maungakiekie-Tāmaki Local Board subsequently assuming responsibility and prioritising the project in its Local Board Plan. Construction began in December 2012. 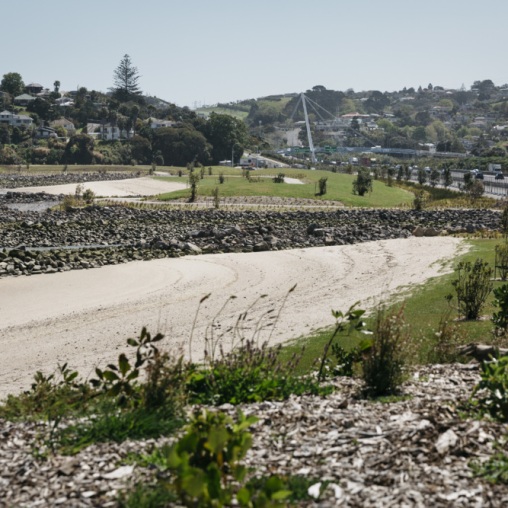 The speeches mentioned constantly the East-West Link that would run from where the Port of Onehunga is (where the Onehunga Foreshore ends nearby) along the Manukau (Mangere Inlet) Foreshore to Southdown in the east. In short it would repeat the severance that State Highway 20 did to Onehunga Bay from the people of Onehunga and wider Auckland. So it begs the question if this Onehunga Foreshore was to well fix a wrong from the 1970’s why is NZTA and Auckland Transport about to commit the same wrong with the East-West Link.

I don’t think the MPs and Councillors present really got that when I probed them on it during the walk about after the ceremony, although Councillor Krum was guarded in her comments.

But when I talked to Cr. Krum and the Mayor on Port of Onehunga I could very easily sense building energy into turning the well under-utilised port into the Manukau Harbour’s Wynyard Quarter (see: Port of Auckland and Panuku to Talk Turkey over Port of Onehunga #AKLPols)

At the moment Onehunga (town centre) is an “Unlock” class urban renewal program under Panuku Development Auckland while Manukau (City Centre) is most likely to be the biggest “Transform” class program outside of Wynyard Quarter. With Port of Onehunga looking at undergoing an extensive urban renewal program itself the wider Onehunga area could elevate itself into the Transform class as well alongside Manukau and Otahuhu.

This means we have two rising jewels in Auckland’s crown through Manukau (already mentioned in the blog before) and now Onehunga as we turn our attention to the forgotten harbour – the Manukau Harbour.

It also means we have two place-making activities that need to make their way through the processes with mana whenua and the citizens alongside like the 2012 operative City Centre Master Plan did. And with this place-making we have the chance to do something in the 21st Century that will leave a well-fitting legacy for generations to come.

So think to yourself on how and what you would like to see with the place-making with Manukau and Port of Onehunga as we will be asked by Panuku sooner rather than later.

In the meantime: Do Not Forget to Submit on @AklTransport Manukau Bus Interchange #BetterAuckland