Note: Since the Future Urban Land Supply Strategy is under consultation right now there is a few work streams underway with Southern Auckland and its future development. Those work streams include Structure Planning to flip the Future Urban Zoned land in Drury to live urban zones, and Auckland Plan refresh work. Those post makes no representation of what the Auranga development in Drury West is proposing but rather possibilities of options the South can face over the next decade.

We know Auckland is developing like a donut city (Auckland: The Donut City) with residential development concentrated to the fringes in the South, North-West and North while employment growth is concentrated to the middle (City Centre) and in-part the Airport industrial complex. The development prompted a presentation from myself to the Planning Committee last month (The Auckland Donut: A Presentation to the Council Planning Committee) that was received well by the Councillors. Coincidentally I did some preliminary mock ups of how Southern Auckland could develop over the next thirty years bearing in mind the donut situation (Auckland Plan Refresh: Spatial Development Ideas for Southern Auckland).

The Urban Geography ideas that came from the exercise:

Here I go placing down the basic urban development ingredients between Otahuhu and Paerata. Elements included:

Note the possibility of a new Town Centre or Metropolitan Centre.

With all this in mind the developers of the Auranga 1,350 housing development in Drury West floated four options of how Drury could develop over the next decade or so. Bearing in mind Auranga were canvasing opinions as consultation to the Future Urban Land Supply Strategy via Auckland Council is currently open and Structure Planning is under way at the same time. However, what Auranga have raised some serious points on possible directions Southern Auckland could develop as well as consequences.

During consultation on this project, all submissions to Council supported our proposal and works are now well under way.

Since then, Council has adopted the Auckland Unitary Plan confirming that over the next 30 years approximately 1,000ha in Drury West and 1,000ha in Drury East of land that is zoned future urban will, among many other locations, be developed.

So by 2047 Council envisages there could be between 5,000 – 7,000 houses, commercial land, parks, schools and other amenities in Drury West and about the same in Drury East. That could be up to 14,000 houses and around 35,000 more people living here.

In addition, Council’s Future Urban Land Supply Strategy (FULSS) indicates that Drury West will be ready for development in the late 2020s. As part of a refresh of the FULSS, Council is now considering whether to bring the timing forward to 2022 for the land north of State Highway 22 (Karaka Rd).

As a founding member of the new Drury West community, we are committed long-term to achieving the best possible outcome for the future of this area, and want to make sure our plan fits with Council’s.

This is important because Auranga is committed to leading the delivery and funding of major infrastructure (water and wastewater) that will service Drury West, Hingaia, Drury South and Paerata. If we can agree a plan that allows us to carry on developing the land in a timely manner, we can deliver these upgrades.

We also want to clearly establish our position before Council starts its structure planning process for Drury West so there is more certainty about housing delivery and community building between now and 2022.

So there is the context (and disclaimer in bold).

What does Auranga have in mind bearing in mind this is their ideas while the FULSS is open for consultation?

Given Council wants development in Drury West to happen sooner rather than later, we’ve thought about how this could happen and come up with four high-level options. These options are indicative only, but have a lot of technical work behind them and meet Council’s requirements under the Unitary Plan for structure planning land zoned future urban.

PLEASE NOTE: ALL MAPS ARE INDICATIVE ONLY INCLUDING THE LOCATION OF ANY POTENTIAL SCHOOLS, WHICH WILL BE DETERMINED BY THE MINISTRY OF EDUCATION. 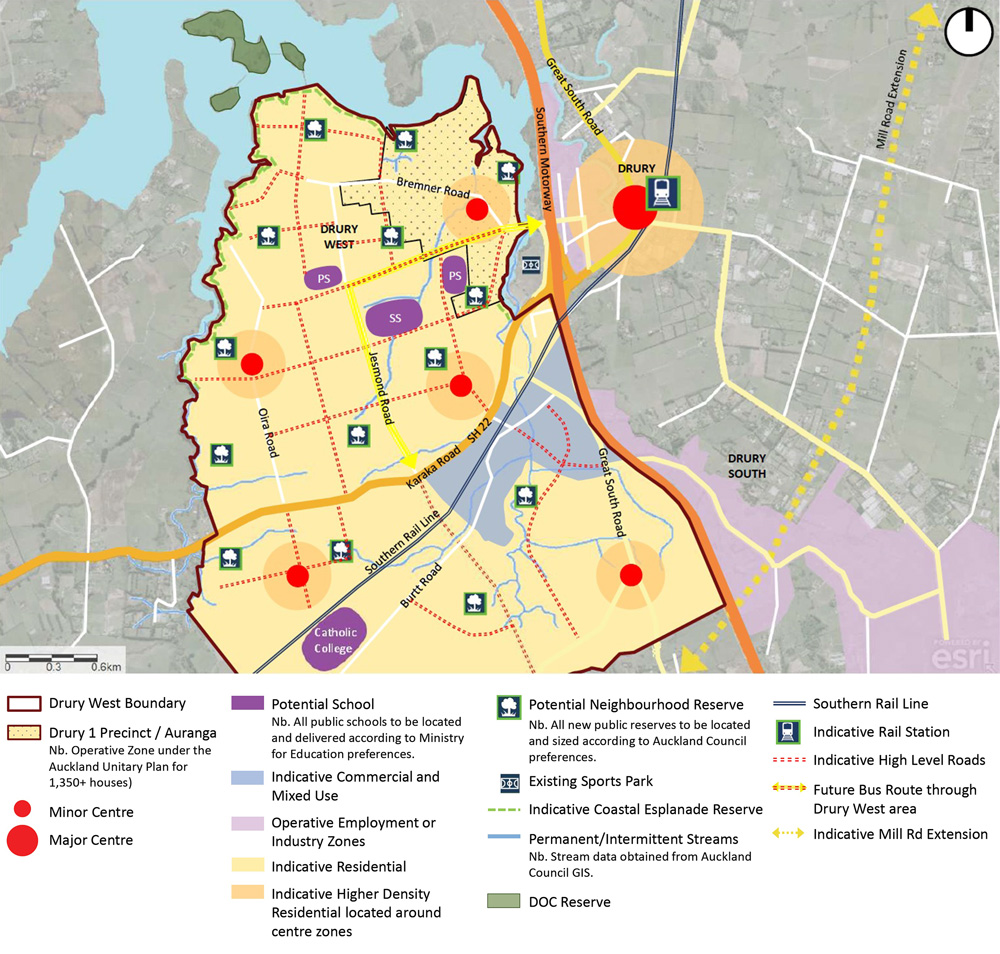 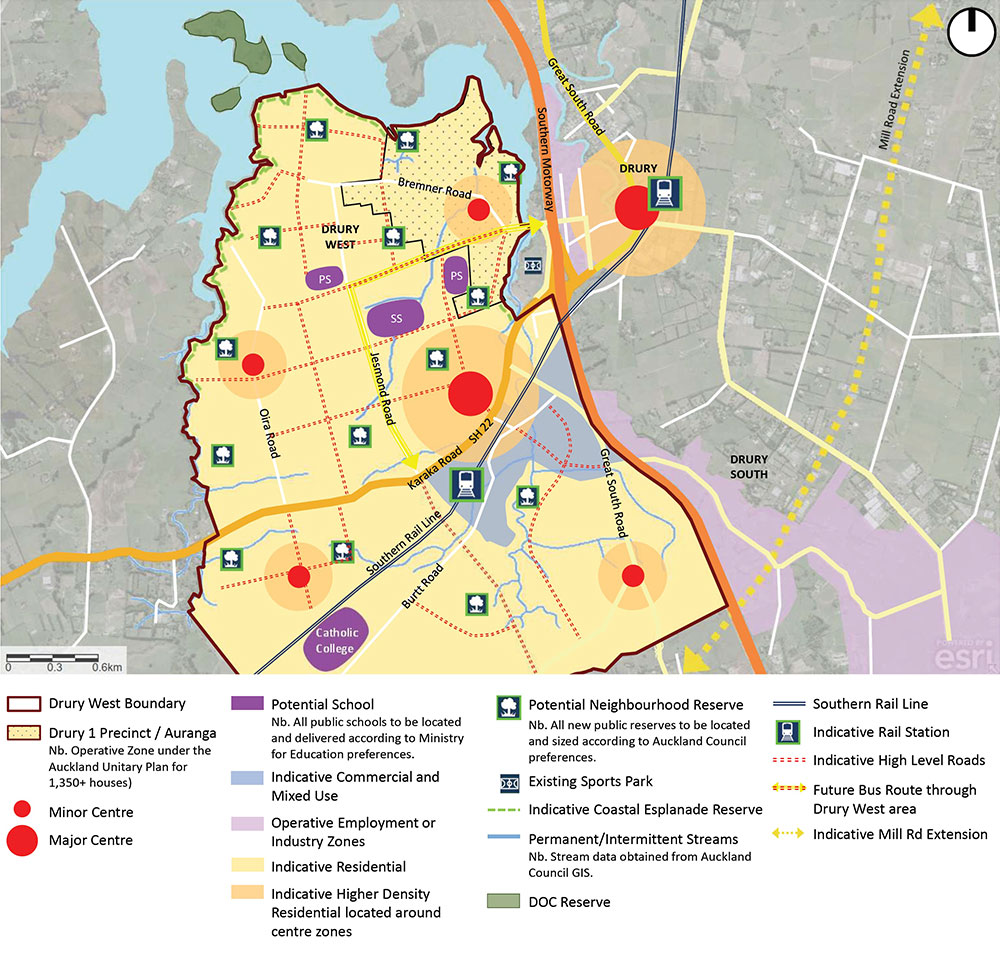 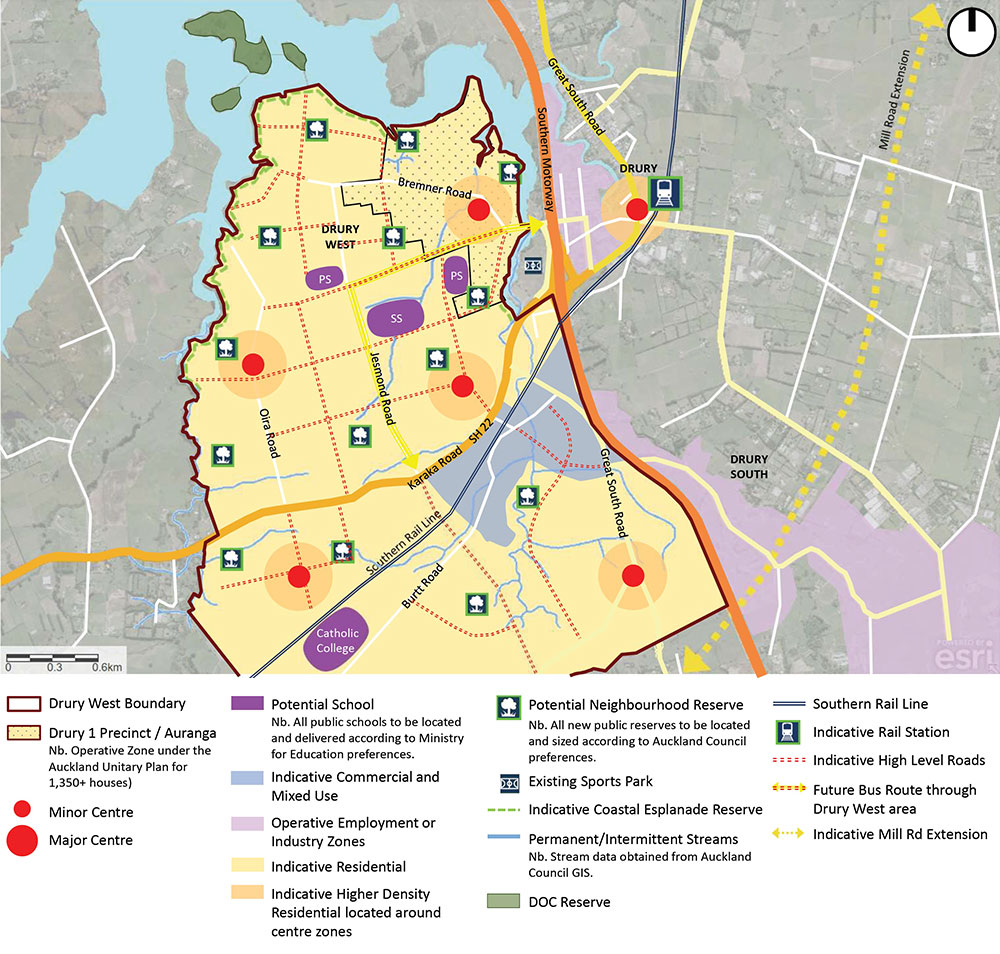 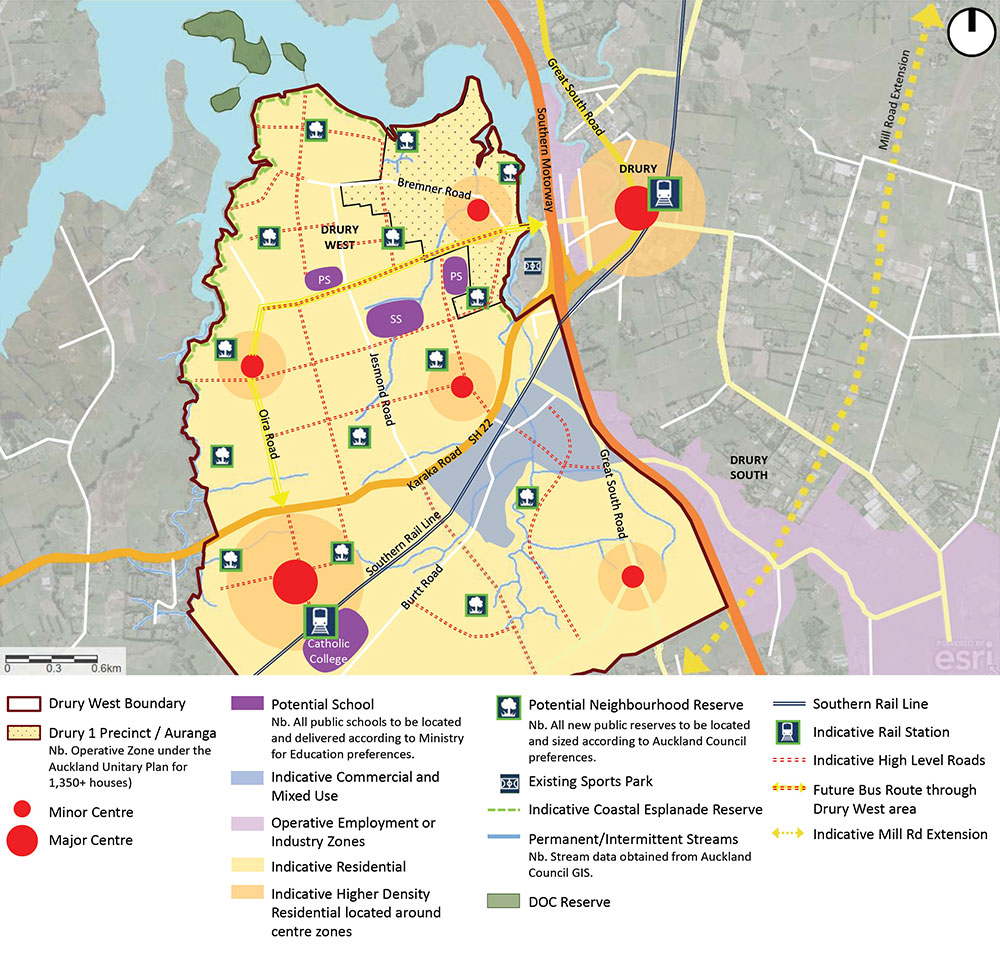 Straight off the bat I do not like Option Three as that promotes exurban sprawl and consequently generated long distance commutes north. The efficiency gained from higher density developments is missing from Option Three thus the consequences to the human and physical environment.

Option Four is similar to Option Two but with the second centre (a Town Centre) further south. As I see it you can easily get three Centres (two Town Centres and a Metropolitan Centre) as time draws on and the Paerata development to the south-west intensifies. For now the blend of Option One and Two (so a Metro and Town Centre) was the best pick with the centre in the south-west a Local Centre until intensification allowed it to become a Town Centre.

As I saw it (and fed back to Auranga) Options One and Two blended together gave the best possible outcome for the deep South while being the closest to the representation I gave in my Auckland Plan Refresh: Spatial Development Ideas for Southern Auckland. Remember from earlier on:

So would Auckland get an 11th Metropolitan Centre?

Would it harm Manukau and Papakura?

The simple answer is no, a new mall next to a new transport interchange at Drury would not harm Manukau City Centre and its mall.

Urban and economic Geographies between Drury and Manukau are different as are their respective catchments.

The new mall at Drury would be set in a Town Centre environment while Manukau is set in a Metropolitan Centre environment. Town Centres (like Local Centres but bigger) are designed for a localised catchment where as a Metropolitan Centre is designed for a sub regional (or in Manukau’s case regional and inter-regional) catchment. The size of the catchment will ultimately determine the agglomeration bonus effects – that is what and how much will cluster together in mutual benefit of one another inside a respective Centre. The City Centre obviously has the largest catchment thus the largest agglomeration bonus benefits in Auckland (hence the clustering of services and high density towers). Manukau City Centre would be next on the list with its catchment all of Southern Auckland and the northern Waikato. Consequently from this large catchment it too has large agglomeration bonus effects Drury would not be able to reach (being a Town Centre it does enjoy agglomeration benefits but at a small-scale).

I would not expect to find Government department headquarters in Drury but would in Manukau is an example of catchments and agglomeration. Manukau through its catchment would attract more international offerings in terms of retail and hospitality hoping to cash in on the large agglomeration bonus Manukau provides where as Drury necessarily wouldn’t (would favour smaller and local based retailers). Simply put I would go to Manukau for very different reasons compared to going for Drury. Drury I would visit for the “local” shop and quiet catch up at a cafe or local green space. Manukau I would visit for the big retail scene, the wide hospitality scene especially at nights or the weekends, or the civic services clustered in the area.

Manukau is undergoing urban regeneration via Transform Manukau with the Metropolitan Centre zone allowing 18 storey residential or commercial towers. Ideally the Manukau Mall would double its size (by going up) to allow space for 400 retailers, a diverse and ethnic food-court scene, plaza space for informal recreation and allowance for residential and office towers above the mall itself. At least then the core of Manukau would be able to service its growing sub region of Southern Auckland more effectively than now. But in the end Manukau and Drury serve very different purposes to each other.

As for Papakura Metropolitan Centre? Apartments are slowly being built to give the place critical mass but a lot need to be done streetscape and retail offerings wise to bring Papakura up to its full potential.

Southern Auckland housing another Metropolitan Centre would give a signal to residents, businesses and investors the South is the place to be. Also remember we are trying to cut down long distance commutes from the South into the Isthmus to relieve pressure on the transport system. A new Metropolitan Centre allowing intense development over the next three decades would certainly act as a pressure relief value for the South and wider Auckland.

These are interesting times ahead for the South. Serious stuff is in the pipeline and working its way through the mill. Drury is set to take off and we have serious ponderings on the South taking a new Metropolitan Centre while Manukau could be very well and finally elevated to Super Metropolitan Centre status. The catch is transport. At minimum a new transport interchange at Drury for rail and feeder busses is needed to support the incoming growth. Even better would be the electrification to Pukekohe so the electric trains could service the area. The ultimate would be both of those happenings AND the Manukau South Link allowing direct services from Pukekohe and Papakura to Manukau City Centre – the regional Super Metropolitan Centre.

One thought on “Auckland to Receive its 11th Metropolitan Centre? Is the Super Metro Back?”